A beach of a life 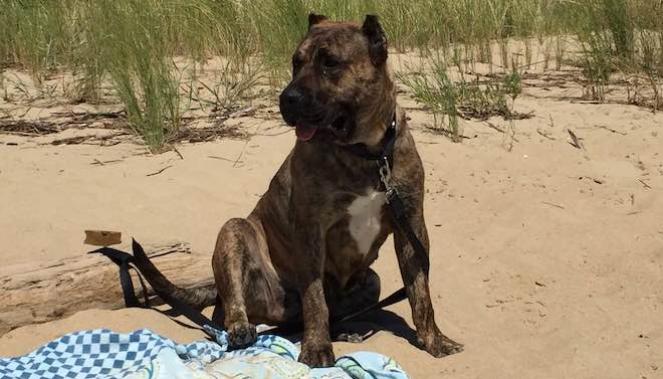 From the bright lights of the big city to the soothing waves of water lapping onto the shore, life couldn’t be more different for everyone’s favorite presa canario. Sarra, a gentle giant of a mastiff, even has a new name (Sasha) to go along with her new life. And she is one lucky girl.You may remember that Sasha had been with Best Friends–New York since February, 2015.

Though Best Friends featured Sasha at most of its adoption events, New Yorkers were not quite ready to welcome home a 100-plus pound lap dog. But a Maryland family was.

Kate and Steve Bornschein had laid to rest their own beloved presa canario, and spent some time healing from that loss. When the family felt ready, they started poking around on PetFinder to see if any similar dogs needed a home. They didn’t find many.

“When I first started looking, I only found maybe 50 or so of that breed in the whole country,” said Kate. “I was worried what that meant. Were they the victims of bans or something else bad?”

And then Sasha popped up. Even though Sasha was several hours away, Kate decided to look into the possibility of adopting her.

“Kate sounded really enthusiastic about Sarra (now Sasha),” Shannon recalled. “I was really rooting for them to make it up here for a meet-and-greet.”

The Bornscheins considered their sanity, but in the end they made the decision to drive nearly five hours north with their four year-old son and 10-year-old dog Angie. Sasha would be at a mobile adoption event at the PetSmart on Atlantic Avenue, and the Bornscheins intended to meet her there.

While it might have felt like a risk to make the long drive, there was no reason to doubt the family’s decision. Sasha was just as they’d hoped, and they adopted her on the spot. So, with Steve driving, Angie riding shotgun, Kate and her son in the back seat and Sasha in the very back, the newly expanded family headed back to Maryland that same day.

Now that they’ve all had a bit to settle in, how is Sasha doing?

“Terrific! We are so happy to have gotten her,” Kate beamed. “She just adores our son to pieces and is so patient with our older, alpha dog.”

One of the family’s favorite outings is trekking down a wooded path leading to a beach-like area. As if sniffing the woods wasn’t exciting enough, Sasha quickly learned how pleasant sand feels between her toes, on her nose and anywhere else she can get it.

“I put a blanket down for her and she just looks at me as if to say: “Why did you just put that in my way?” Kate said. “She loves to dig and dig.”

But what she won’t do is get in the water. At first Sasha play bowed to the waves, but after getting splashed she realized the waves weren’t playing. Now Sasha puts on the brakes before getting too close to the incoming water, preferring to stay a dry beach baby.

From Sasha’s distrust for waves, ceiling fans and aerosol cans, to the way she whips her head back and forth for her meals, Kate says that learning the dog’s funny quirks makes her even more endearing.

Indeed, she says, the family feels complete again, thanks to Sasha.