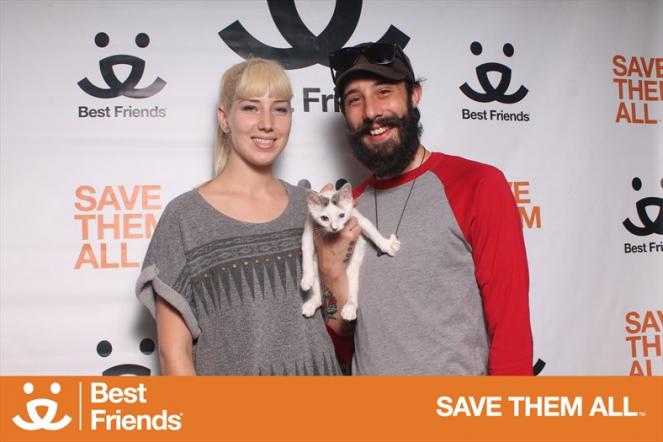 One kitten’s happily-ever-after was three months in the making.
By: Christina Green on October 07, 2015

It’s not unusual to see excited people practically skipping away from Best Friends-New York pop-up adoption events, [http://ny.bestfriends.org/events/local-events] with new pets tucked under their arms or prancing alongside them. These events, which take place in a new location within the city each month, draw an average of 1,300 people, who come to see dogs, cats, kittens and puppies from Animal Care Centers of NYC. The animals are available for adoption from Best Friends or local partners.

Because the pop-ups are never in the same place twice, it’s hard to imagine how one particular event could become a joyful reunion that ended a pet’s three-month, difficult journey. And yet, that’s the story of Jamie Charapata and a tiny kitten she rescued and named Lily.

The laundry room in Jamie’s Brooklyn complex requires walking through a gritty and, as she describes it, “kind of creepy” courtyard. Therefore, she usually does laundry off-site. But one July day, as she prepared for houseguests, Jamie braved the courtyard and there she was — a helpless kitten weighing less than a pound, curled into a little ball, covered with fleas, her life hanging in the balance and no sign of a mom cat anywhere.

Jamie called her vet, who recommended contacting Animal Care Centers of NYC because the kitten was so young and vulnerable. Not knowing how else to help the kitten, but sure the little one would die if she did nothing, Jamie called.

“I was really nervous because I didn’t know what they would do with her and I really wanted to adopt her,” said Jamie. “I told them I’d be calling every day for updates and as soon as she was available, I wanted her.”

And call, she did — every day for a week. Each time she heard the same information: Yes, she’s here. No, we can’t adopt her out yet. Until one day she called and learned that Lily had left the shelter.

“I kept thinking about Lily’s butterfly-shaped calico markings on her head and ears and her beautiful white coat,” she said. “I was heartbroken.”

It took some doing, but Jamie worked with the shelter to track down where Lily had gone. Encouraged by her boyfriend Matthew and friends, Jamie didn’t give up.

Not only did her perseverance pay off, she learned that Lily had gone exactly where she needed to be at the time.

“Lily was about four weeks old when we pulled her from the shelter in early July,” said Kristi Adams, Best Friends–New York foster and adoption coordinator. “She was very sick and had to stay in the intensive care unit for weeks.”  During that time, Jamie kept calling for updates, never giving up on her dream of adopting Lily.

“I was hoping Jamie would be able to foster the kitten beforehand,” Kristi said, “but Lily just wasn’t strong enough.” As the little kitten continued regaining her health and grew big enough to be spayed, Jamie would have to wait just a bit longer until she could bring her home.

Over the course of a few more weeks, Lily’s health improved and she gained enough weight to be spayed — just in time for Best Friends’ September pop-up event.“I knew Jamie and her boyfriend wanted Lily and told her exactly where to find her at the event,” said Kristi. “I knew they were the right family for Lily.”

Far from the helpless ball of fur of their first encounter, this time Jamie found an active kitten playfully batting around a ball. “When I first saw Lily at the event, I almost didn’t recognize her,” Jamie says. “She was so healthy and active. Walking out of there, I was trying so hard not to cry.”

Lily fit into Jamie’s life, which includes Matthew and their eight year-old cat, Lion-O, and proving that believing even in just one spark of love can lead you home.