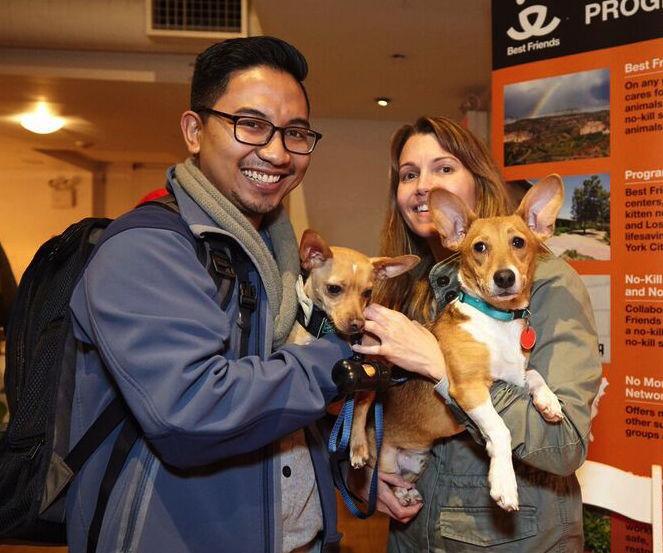 Thousands of animal lovers help make it a super success.
By: Christina Green on December 22, 2015

No place can compare to New York during the holiday season, and that famously festive atmosphere carried right into the Best Friends Super Adoption event in Manhattan over the weekend. Thousands of folks attended, and hundreds of pets now get to spend the holidays waiting for Santa with a family of their own.

With no arctic chill or silvery snowflakes to contend with — many people didn’t even need jackets — some 200 people lined up early outside the Altman Building to be among the first to enter the event on Friday, December 11, its first day, says Amy Davila, Best Friends–New York marketing manager.  “Approximately 8,000 people poured in over the three-day event,” she says.

Melting in a winter wonderland

But it wasn’t just the rising mercury that melted things — not when there were hundreds of adorable animals cranking up the cuteness factor. So it’s no wonder that many visitors’ hearts melted, too.

“One lady came over to adopt her first kitten. She had her sister, who had cats before, accompany her to the event to help her out,” says Kristan McCormick, Best Friends–New York foster and adoption coordinator. “She picked out a kitten and while that was being finalized, the sister ended up falling in love with an adult cat named Piglet, and she ended up adopting as well.”

No More Homeless Pets Network [bestfriends.org/network-partners] partner Waggytail Rescue found the perfect person for Celine, a 10-year-old purebred Yorkshire terrier with a weakness for belly rubs. Two year-old Douglas, a Chihuahua mix, flew all the way from an overcrowded shelter in Los Angeles to find the right home in New York with Waggytail.

And he did — along with more than 300 other dogs, cats and even a few bunnies.

The furry angels up for adoption enjoyed some star-studded support when a few celebrities stopped by. Among them, was a lady who knows a little something about being an angel, too — Victoria’s Secret model Lindsay Ellingson, who helped promote some of the pets looking for homes.

Saturday Night Live alumnus and Best Friends supporter Kevin Nealon had some fun with a few animals, including giving one particularly adorable, little puppy who likes to lick a taste of his own medicine.

Even Jackie Cruz from Netflix’s hit series Orange is the New Black checked in to the super adoption event to play with some animals. She learned quickly, though, that it’s hard to just play with animals and not fall in love. She ended up putting in an adoption application for a puppy named Snowball from Network partner Animals R Family.

Best Friends would like to thank all of the kind, compassionate people who came out to the super adoption event in New York. A special thank-you goes to Skechers, Hallmark and PetSmart Charities for making super adoption events possible around the country with generous support.

Bummed because you think you missed out on finding your perfect pet? You can still “Bring Joy to your World” when you adopt a pet for just $25 from Best Friends or one of its nationwide No More Homeless Pets Network partners though December.

Follow the Best Friends Facebook page to see when the next mobile or pop-up adoption event will take place.