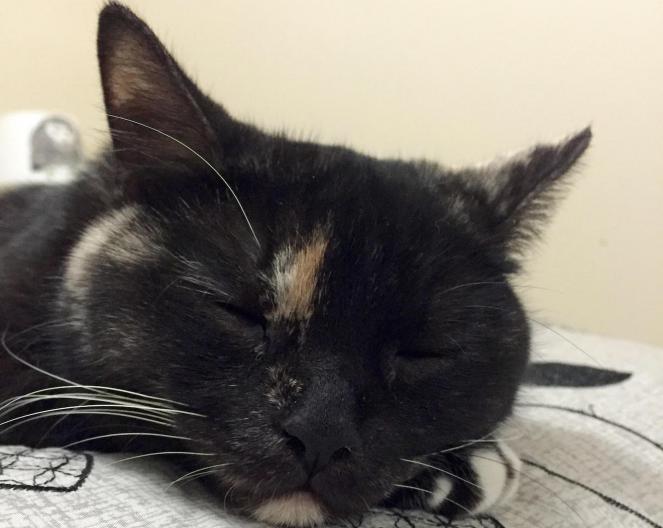 Cupid’s arrow hits the mark on its first try for a little cat named Scott.
By: Christina Green on February 26, 2016

The new year hadn’t exactly been going well for Scott — or Lady Scott, as she’s more formally known. From originally being mistaken for a boy (hence the name) to sitting in one of the Animal Care Centers of NYC with an upper respiratory infection, life was just uncomfortable for the demure little cat.

But all that was about to change for her — and pretty quickly.

First, she won the affection of the Best Friends–New York team, which pulled her from the shelter back in early January. Because of her illness, she bunked down at a partner veterinarian’s office for around-the-clock care. But she mended pretty quickly and easily, thank goodness.

And she mended just in time for Valentine’s Day, so Scott joined the fun at Best Friends’ Valentine’s Day pop-up adoption event. The event itself was a smashing success, with some 1,300 New Yorkers stopping by to spend the holiday of love sharing good times with homeless dogs and cats. When it was all said and done, 45 dogs and cats experienced lasting love with new families of their own.

For Scott, the whole thing was brand new. She’d never been to an adoption event before. This was her big debut. And she nailed it.

“We were calling her Lady Scott at the event so people knew right away she wasn’t a boy,” says Kristan McCormick, adoptions specialist for Best Friends–New York. “She was super sweet, head butting everyone she met, and purring her song all day.”

As you might expect with a face as sweet as hers, someone fell in love with her music. In fact, it was a wonderful couple who had previously adopted a kitty from one of Best Friends Super Adoption events. Now they were looking for a companion for their first feline. They thought Lady Scott might be the perfect match.

Scott was just one of many love-struck furry friends to go home from the event. Check out Best Friends on Facebook for more happily-ever-afters and to see some of the faces of dogs and cats still hoping to make every day a celebration of love with a family.

Best Friends would like to send a special thank-you to the local rescue groups who helped make this event a huge success: K9 Kastle, Second Chance Rescue, Posh Pets and Animal Care Centers of NYC.