A second chance for an American bulldog 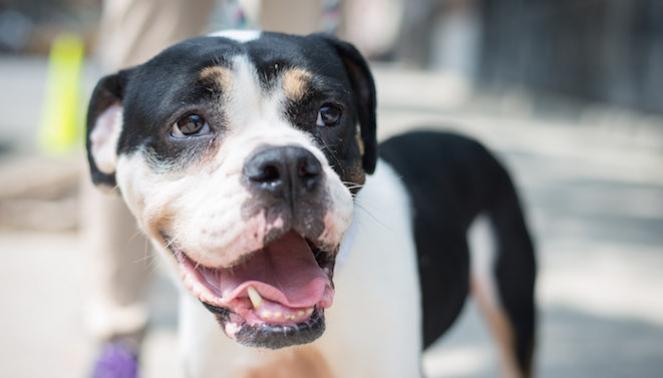 Churchill wants to lead the charge home.
By: Christina Green on February 18, 2016

Obviously, the first thing you notice about Churchill is his awesome underbite. But he has a happy, bright smile, too.

The thing is — he had been reserving that chipper grin for the ladies only. So much so that when men (or other dogs, for that matter) walked by at adoption events, that smile would fall into a deep frown.

“Churchill is a doll, an absolute doll,” says Shannon Kirkman, mobile adoptions coordinator for Best Friends–New York. “But he was definitely anxious.”

Good-natured behind the anxiety

It’s not hard to imagine looking at that face, but Churchill will have you cracking up in seconds — pretty much as soon as he starts to move.

A goofy and playful, typical three-year-old dog, he can really turn on the charm offensive one-on-one. But in a busy setting with lots of people and other animals, that doesn’t go so well.

Like all pets with Best Friends–New York, Churchill came from Animal Care Centers of NYC. But his life before that was a mystery, including what might have caused him to be so blue when it comes to men. All we knew was that his unhappiness was getting in the way of him finding lasting happiness — that and (frankly) the fact that it was a miracle he was still alive.

“When we pulled him from the shelter, he was severely anemic,” Shannon says. “We were told any other dog would probably not have survived that.”

It was unclear what caused his condition. But like his namesake, Churchill is stubborn and tough. So after a long recovery period with a local veterinarian, he was back in a New York groove, charming the ladies.

One challenge down, one to go

After Churchill regained his health and it was determined what makes him anxious, Best Friends staff looked for ways to help him feel more comfortable in his own skin.

Since completing his training program, Churchill has befriended male volunteers, much to everyone’s relief. But it does still take a little extra patience for him to trust most men — perhaps a little less than that if he’s gently persuaded with lots of yummy treats.

Looking for that special family

Shannon says she’ll be bringing Churchill to smaller, weekend mobile adoption events. These typically only include a few dogs, so the quieter environment may help Churchill forget about his jitters.

Even so, he’s going to need a family willing to be patient with him while he “feels out” the men in the group. He’ll do his best scary dog impression with men at first, but if they ride out his first attempt and share some tasty treats after he settles, Churchill has it in him to make friends. Shannon and the Best Friends adoptions team will help the new family understand how to help Churchill, too.

If you’re interesting in opening your heart and home to Churchill either as family or a foster, please email us: nyc@bestfriends.org.