The leashes that bind us 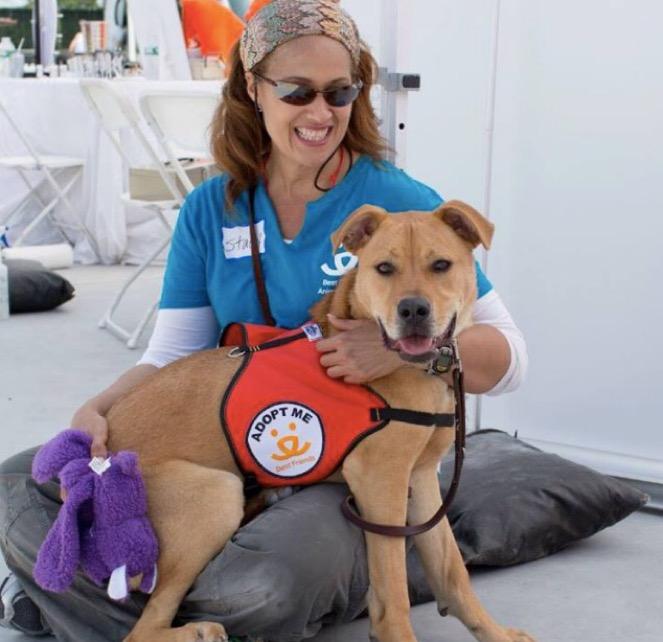 On Friday, May 13, thousands of people and hundreds of adoptable cats and dogs will descend upon the Brooklyn Expo Center for the Best Friends Super Adoption event. And by the end of that weekend, a good number of those adoptable pets will have packed up their leashes and toys and headed home with loving new families.

At the end of that weekend, you’ll also find a different kind of family hanging back at the expo center, breaking down dog crates, packing up event equipment and ribbing each other relentlessly all the while. This family is composed of Best Friends staff and volunteers, including a close-knit group of volunteer team leads who have turned volunteering on behalf of homeless pets into a second home.

An all-star line-up for NYC

Best Friends’ program in New York is supported by approximately 400 active volunteers. And as volunteer program specialist Maria Hertneck will tell you, there are about 15 volunteer team leads who are at the very heart of that volunteer network.

“It’s hard to single out any one of them,” says Maria. “They really are the ones who make things run. Most of them have been here since the very beginning and there’s a noticeably deep bond among them.”

Like we said, giving each other a hard time is one of this group’s favorite pastimes. And according to team lead Kathy Posekel, teasing Peter Vega is usually their prime objective.

“We’ve got a great group that loves joking with each other. And Peter is definitely the ringleader,” says Kathy.

A former member of the NYPD who was part of an FBI task force and who now works for the Secret Service, Peter Vega can best be characterized as a dog lover with a heart of gold who’s prepared for just about anything. “Peter is at every single event we host and he’s the first person we call when there’s any kind of crisis, big or small,” says Maria.

And she isn’t kidding. One particular day, Shannon Kirkman, Best Friends’ mobile adoption coordinator, was transporting a van full of dogs to an adoption event when she got a flat tire. Changing a tire on a vehicle full of animals while keeping them all calm and comfortable is no small task. Peter was her first call.

Peter is also one of the volunteers who works well with dogs with behavioral challenges. “Oh yeah, Minnie LOVES Peter,” says Kathy. The Minnie she’s referring to is a stunningly beautiful bulldog mix who has been patiently waiting for a home for more than a year.

“Yeah, supposedly Minnie doesn’t like men,” explains Peter. “But she doesn’t necessarily have a problem with men. It’s just that some of these guys approach her in the wrong way. They make her uncomfortable. I don’t have any kind of magic wand. I’m just thoughtful about how I approach her. It’s just about using a little common sense and she does great.”

With Minnie still searching for that perfect home, Peter’s ability to show potential adopters how to appropriately approach and interact with dogs like Minnie at adoption events is invaluable.

Also high on the list of volunteers who the dogs adore is Dale Musselman. A senior media consultant by day and master dog handler and volunteer by night and weekends, Dale is an indispensable member of the group. In addition to volunteering with Best Friends, he’s been volunteering with Animal Care Centers of NYC for many years.

“Dale is a jack-of-all-trades. He’s got this huge skill set and is always there to help, whatever the need or task,” says Maria. “He’s also one of the biggest advocates for the dogs on social media. He’s always sharing and posting about the different dogs up for adoption and is constantly working to get the word out about dogs who take a little longer to find a home.”

“The dogs who are easy adoptions just come and go so quickly. But it’s the more challenging ones who you really get to connect with,” explains Dale.

Tyler, a young caramel-colored pup who, true to his puppy nature, can be calm one moment and bouncing with energy the next, is one of those dogs. “He can be a challenge to work with,” says Dale, “but you develop such a connection with him. You want to spend extra time working with him at every event.”

And Tyler clearly feels that special connection, too. “At one event, a new volunteer was getting ready to walk Tyler when suddenly he spotted Dale across the room in the kitchen,” remembers Maria. “Tyler immediately made a beeline for him. The relationship those two have is pretty obvious.”

Most recently, Dale played a key role at a major fundraising event for the animals in the city. He says, “The fundraising gala was one of the more rewarding experiences I’ve had as a volunteer because I was able to provide some of my own expertise and worked closely with the staff to prepare all the audio-visual equipment for the event. They were incredibly appreciative and it was just a really meaningful role for me.”

“Kathy’s been with us forever. When I was hired, she was the one who really helped me figure out how everything worked at my first super adoption event,” says Maria. “We have so many people come and go at these big events. And she’s the one who really remembers people. She’s the glue that keeps everyone together.”

Like Peter and Dale, Kathy has been volunteering with Best Friends for longer than she can remember. She’s also been out to Best Friends Animal Sanctuary several times, including a trip to attend a workshop on how to start and run an animal sanctuary.

In addition to her time spent volunteering with Best Friends, Kathy has been a volunteer with Animal Care Centers of NYC for more than 10 years. And she’ll tell you that in that time she’s probably crocheted upwards of 1,500 blankets for the cats there. And when she’s not doing that, she’s helping them recruit new volunteers.

Kathy also has a soft spot for the dogs who are a little rough around the edges. And like Dale, Kathy says that Tyler is one of her favorites. “I like to say that he’s part Lab, part pit bull terrier and part knucklehead. We’re all rooting for Tyler,” says Kathy with a laugh.

True to her unending commitment to the animals, Kathy has already put in for vacation time at work so that she’ll be there to get things rolling at the upcoming super adoption event. “Kathy is an absolute cornerstone of our volunteer program and has helped our work in New York grow and thrive,” says Shannon. “It’s impossible to be around her and not be smiling or laughing. She is truly a joy to be around.”

Shared values and a family bond

For Peter, Dale and Kathy, volunteering is first and foremost about the animals. Each of them will tell you that there’s nothing like seeing a dog who’s been waiting for a while finally get adopted and that they really can’t imagine spending the numerous hours they put in every month doing anything else.

But they’ll also tell you that it isn’t just about the animals. It is, very much so, about this special group of people who they’ve come to know as a second family.

Dale: “I love our NYC team, the staff and volunteers. Adore them, actually. We’re obviously there for the animals, but there’s this strong connection with the people there, too. I’m quite proud to be a part of it.”

Peter: “The people around me are just great people. We all genuinely care about each other. My mom passed away in March, and some of the Best Friends staff and team leads were there at the funeral. That’s just how we are. Collectively, we do a great job. I’m very proud to be a part of this.”

Kathy: “We work well together and we’re like family. The staff members we work with are phenomenal. They work hard and so do we. New volunteers see our drive and that we’re all here for the animals and for each other.”

For those of you in and around New York City who don’t already have plans for the second weekend in May, please stop by the Best Friends Super Adoption event to say hello. And while you’re there, pay special attention to the all-star cast of volunteer team leads expertly orchestrating much of the event.

They’ll be the ones diligently mentoring new volunteers, managing row after row of goofy adoptable dogs, and laughing and joking with each other from sunup to sundown.

And they’ll be happy to tell you just how special volunteering on behalf of homeless dogs and cats can be.