A scrappy Prince finds his ‘castle’ in Connecticut 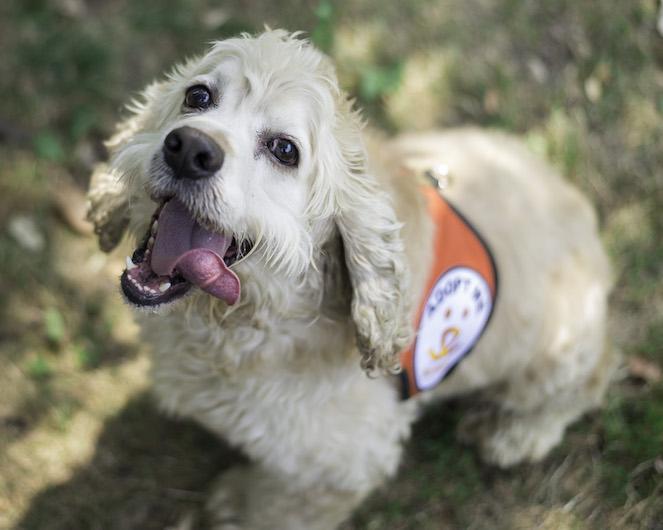 In this fairy tale, a special little dog finds his perfect royal family, and does so thanks to the love and support of his perfect foster home.
By: Emily Douglas on April 13, 2016

Last month on the Upper East Side of Manhattan, Kristan McCormick, foster and adoption coordinator for Best Friends–New York, was waiting patiently to meet some potential adopters driving in from northwest Connecticut. The dog they were coming to meet was Prince, a cream-colored cocker spaniel who’d been having a rough go of finding a new home.

Always judge a man by his dog T-shirt

It took all of two seconds that day for Kristan to recognize the adopters, Charles and Diana, as they made their way toward her. “They were walking down the street and I instantly knew it was them,” recalls Kristan. “They looked like they were on a mission. And Charles had a T-shirt on that said ‘Spaniel Dad’ and I knew right then that Prince was going home with them.” And they knew it, too.

“We knew, unless something unforeseen happened, that we were taking him home that day,” says Diana, who had been diligently searching Petfinder for a new addition to their spaniel-loving family. “Now, we have a Prince and a Princess, and we’re Charles and Diana. How fantastic is that?”

Oh, did we forget to mention that? Charles and Diana also have a 10-year old springer spaniel named Princess. And now with Prince, their royal family is complete.

Once upon a time

Before arriving at that happy ending, Prince’s story started on a difficult note. He had been surrendered to Animal Care Centers of NYC, and when the Best Friends staff first met him, he was struggling with anxiety. “He was really anxious at adoption events and seemed like he just wasn’t comfortable in his own skin,” says Shannon Kirkman, Best Friends’ mobile adoption coordinator for New York.

Finding the right foster home where Prince could get comfortable and find a reliable routine took some time. But last October, he finally landed in the home of first-time fosters, Sascha and Dave, who embraced the opportunity to help Prince work on some of his challenges.

Prince’s underlying fear and anxiety typically appeared whenever he had items he considered to be valuable. He would guard toys and food items and also was protective of his living space with strangers. And he didn’t always give clear signals to indicate when he was and wasn’t comfortable. So Sascha and Dave, along with the help of a trainer and Prince’s veterinarian, worked on protocols and routines to ease his anxiety and help address his challenging behaviors.

If you’ve ever seen a Lord of the Rings movie or read the The Hobbit, then you know all about Gollum and his obsession with the Ring (aka his “Precious”). Well, that’s exactly how Prince was with most things. Every a little chew toy was his “precious,” and his need to guard them was an all-consuming event.

“I mean, he’s a little guy. But we live in an apartment and if he had a resource of some kind he was guarding, he’d practically take over the whole room with it,” recalls Sascha. So keeping toys, bones and anything he might want to guard out of Prince’s space became part of the routine. But this resource-loving boy was, well, resourceful.

“We remember this one time, all of his toys had been put away so they wouldn’t be an issue, and so he went looking for other things. He came back with a pile of dirty napkins from the kitchen table and just went about neatly lining them up in a little row and made them his.”

When he first arrived, Prince appeared to be the quintessential diamond in the rough. “He had lots of potential. He was adorable. But it would’ve been a stretch to call him sweet,” Dave says, with a laugh. “We referred to him as ‘the scrappy prince.’”

Scrappy or not, Dave and Sascha fell completely in love with Prince — behavioral challenges and all — and went above and beyond for their special little foster dog.

The healing power of fostering

When they first met Prince, Sascha and Dave were grieving the loss of their own dog Towser, and they weren’t quite ready to adopt again. “We knew we needed some time,” says Sascha, “and volunteering seemed like a good way to start the healing process.”

Sascha got online to search for dog rescue groups in New York, and ended up helping out at a Best Friends pop-up adoption event, after which she signed up to foster. “Best Friends made it so easy to get involved. And the support they provided was super helpful,” she explains. “They hooked us up with this really great veterinarian, along with the trainer who came to our home, and Prince was happy and healthy when he left us.”

“We definitely want to foster again,” says Sascha. “We kept his little ‘Adopt me’ vest so that we’re ready for the next one!”

The life of a Prince

Prince hit the jackpot with both his foster home and his new family. “A lot of the same things we loved about his foster family, we loved about Charles and Diana,” explains Shannon. “They had a ton of past experience with anxious dogs, and were ready to do whatever was necessary to make him happy in his new home.” And happy, he certainly appears to be so far.

Prince and his new sister Princess are living the good life on a big piece of property in Connecticut where they go hiking regularly and enjoy a life of canine leisure. And while his new house isn’t technically a castle, Prince is definitely receiving the royal treatment. “We love that he’s young and bouncy enough to jump up on the couch and in and out of the car,” says Diana.

In fact, Prince already has spring break plans. He and his new family are heading to Newport where his itinerary, according to Diana, will include lots of running on the beach with the seagulls who, from Prince’s point of view, might look a lot like flying napkins.