A love connection at the Skechers shoe launch 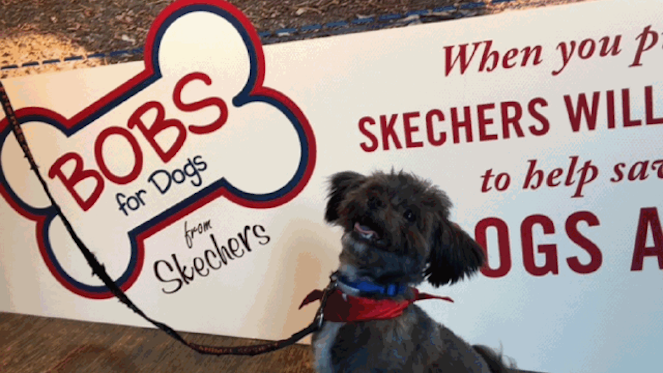 He’s got a bow tie for every occasion, flies first class, and was welcomed into his new home with a homecoming fit for royalty. Party guests received customized invites featuring his handsome face, and then dined on the finest dinnerware — in this case, plastic Frisbees.

You see, it’s only the best for Spike, a shih tzu from New York City. Spike went from shelter-to-celebrity status soon after he met Jeff Jones, national sales manager for Skechers, when Jeff came to the Big Apple to launch the BOBS from Skechers footwear line.

One perfect partnership deserves another

When Best Friends staff first met Spike at Animal Care Centers of NYC, they immediately picked up on his personable, fun-loving disposition. But the scruffy little guy had fallen on tough times and found himself at the shelter, not only with a case of kennel cough, but also in need of a good grooming. But Spike’s scruffy, adorable looks can capture hearts quickly, and his cough was treatable. Once Best Friends–New York took Spike into the program, it wasn’t long before he captured one key heart, which lead to his forever home.

Jeff is a busy executive who divides his time between Skechers headquarters in California and his home in Minneapolis. So he was all business when he arrived in New York to help promote the launch of the new shoe line and partnership between BOBS from Skechers and Best Friends Animal Society.

Little did Jeff know that another important partnership was about to happen. Spike was there to celebrate the launch, too. “There was this adorable dog who would be in in the showroom all day with us,” says Jeff, “and as I talked to people, I could see him out of the corner of my eye just looking at me.”

Jeff’s work trip hadn’t included any plans to adopt a dog, but as the event wrapped up, he couldn’t stop thinking about Spike. It took about 48 hours for Jeff to come to a decision: Spike was going home with him. There was just one thing left to do: get clearance from his partner, Ryan Smith.

Jeff was cautiously optimistic. “I texted him a photo of Spike and said, ‘This guy needs a home.’” Ryan’s response was surprisingly quick. “Okay, bring him home.”

Getting Spike out to Minneapolis required equal parts medical care, strategic thinking and luck. He couldn’t fly home until he was 100 percent cleared of kennel cough, so Jeff returned to Minneapolis while the team at Best Friends–New York got Spike healthy enough to be cleared for takeoff.

The plan was for Ryan to make a special stop in New York on his way back from another business trip, and then accompany Spike home. Of course, it wasn’t that easy. Ryan’s flight was cancelled and the Best Friends team had to do some quick thinking to get Spike to the new flight on time. But luckily it all worked out, and Spike made it to the gate in time to settle into his first class seat.

Once he arrived home, fame came quickly for Spike, who was welcomed to the neighborhood with a puppy shower organized by neighbors. And as soon as the news about Spike’s adoption circulated around Skechers, Jeff began getting requests from his colleagues for photos of his sharp-dressed man who has a bow tie for every occasion. And Spike couldn’t be happier in his new life.

“He has the run of the house, sleeps in our bed and has his own room,” says Jeff. “To say he’s living like a king would be an understatement.”

Spike isn’t exactly a jet-setter — yet. Since he’s still acclimating to his new life, he’s still a nervous flier. Once he feels more comfortable, Jeff will begin taking him to work in California, where he already has a strong fan base.

But fame hasn’t changed Spike. For all the attention he gets, Spike still keeps it real. Jeff says that Spike is a loving dog, especially around Jeff’s mother. When she comes to visit, Spike won’t leave her side. And because he has chronic bronchitis that requires daily attention, it has made Jeff and Ryan even closer, because they have to work together to keep Spike healthy.

“Life changed with Spike,” said Jeff. “We’re both more relaxed and more calm. I think adopting him has done all of us — Spike included — a lot of good.”