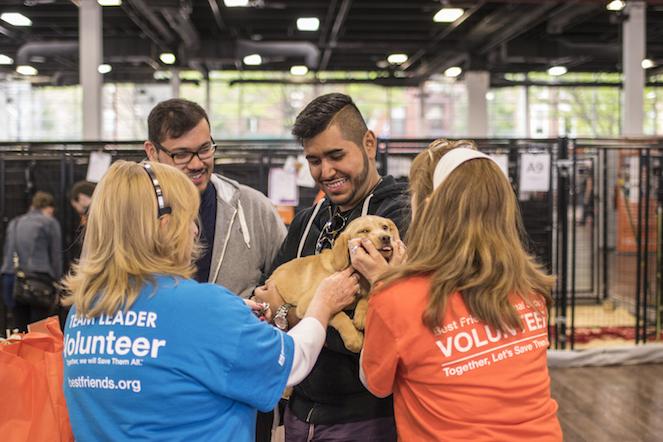 Considering the success of the recent Best Friends Super Adoption, presented by BOBS from Skechers® and held in May at the Brooklyn Expo Center, it’s going to be a great year for homeless pets. During the three-day event, local shelters and rescue organizations joined Best Friends with one goal in mind — to give homeless pets the chance to find the forever home they deserve.

Mission accomplished: Nearly 300 pets from 21 participating shelters, rescue organizations and Best Friends–New York, were adopted at the weekend event that attracted about 5,600 attendees.

It was an especially happy weekend for pets from Animal Care Centers of NYC (ACC), New York’s largest municipal shelter. Not only was ACC at the event with adoptable cats and bunnies, but the pets brought over by Best Friends–New York come from ACC as well.

"We were especially excited that ACC was able to find homes for so many of the cats they had at the event,” said Elizabeth Jensen, executive director of Best Friends–New York. “Between their adoptions and the available space we now have with Best Friends to pull more pets, it was a great weekend for pets from the city shelter, who are now in happy homes — or soon will be."

The story of every pet who finds a home at a Best Friends Super Adoption is special, but some adoptions just seem to have a way of causing a round of cheers (and sometimes happy tears).

Minnie, a big-grinned bulldog, went home with a couple who were instantly over the moon for her. Though she was already one of the most watched pets at the event because she’d been waiting for a home the longest, Minnie drew an extra round of cheers when she was named one of the two New York pets to receive a giant celebration package from presenting sponsor BOBS from Skechers. That led to big smiles on her new family’s faces, as well as hers.

A special home for a special-needs dog

Cheers are also in order for Buddy, a dog brought to the Best Friends Super Adoption by Louie’s Legacy, a Best Friends No More Homeless Pets Network partner. As a puppy, Buddy lost his front leg in an accident, but that hasn’t stopped him from plowing his way through life happily — never meeting a child or a fellow dog he doesn’t like.

The only thing missing from Buddy’s life was a loving home, but that changed at the super adoption when he met a family who fell in love with him — not in spite of his disability, but because of it. In fact, the family had been waiting to meet Buddy ever since they read about him online and applied to adopt him in order to raise awareness and promote acceptance of children with disabilities.

From the moment the family members first met Buddy, they knew they had found their perfect match — and to Buddy, the feelings were mutual. He melted into their laps and stayed lap-side while the family completed the adoption process. Today, Buddy is enjoying his new life in a full house with three children. They’re giving him all the love in the world, and he, in turn, is showing them how inspiring dogs with disabilities truly are.

The super adoption wasn’t just a slam dunk for dogs, but for homeless cats, too.  In the case of an adult cat named Lisa, the journey to her new forever home got a kick start from the Brooklyn Nets professional basketball team, which features adoptable Best Friends–New York pets on its social media sites each week.

When Brooklyn Nets social media organizer Kari Culver wanted to find a cat for her parents after theirs had passed away, each week she perused the Best Friends–New York adoptions web page until she found Lisa, a personable and sweet adult cat perfect for her mom and dad.

Kari attended the super adoption where she met Lisa for the first time, and she knew from the moment she saw her that Lisa was the right cat for her parents. Today, Lisa has settled in well to her new forever home. While she has a room just for her, she prefers to be around people, purrs when petted and loves exploring her new surroundings.

To spread the word about the adoption weekend and help more homeless pets find their forever homes, the Best Friends–New York team tapped into the power of social media to provide up-to-the-minute coverage through a live Facebook video feed that let people experience the event in real time, even though they couldn’t be there in person. And it also helped draw people to the event. That’s important because even those people who “just want to look” might end up going home with a new companion to love.

The Best Friends Super Adoption also got a boost from celebrities like actor Adam Goldberg, whose live co-hosting duties at the event were broadcast live. Click here to watch it.

Jackie Cruz of “Orange is the New Black” stopped by the event with Picasso, the dog she adopted dog at the last Best Friends Super Adoption in New York. Other familiar faces included Rob Marciano of “Good Morning America” his wife Eryn (who also volunteered), and actresses Zosia Mamet, Ashley Williams and Kimiko Glenn.

Any day that a homeless pet gets adopted is a good day, but what made the Best Friends Super Adoption in New York so special is that so many local shelters, rescue organizations and people came together to help shelter pets find happy forever homes. When it was over, there were 283 fewer homeless pets in the city. That’s how many found great new homes during the event.

"Our New York Super Adoption was a fabulous event,” said Elizabeth. “The Brooklyn Expo Center proved to be a perfect space to engage the local community in lifesaving. By the end of the weekend, it was impossible to walk 10 feet down the street without bumping into New Yorkers strolling down the block with their new best friends."

Special thanks to BOBS from Skechers, our presenting sponsor; Petco Foundation, our national sponsor; and to every single volunteer and network partner who came together to help hundreds of pets go home.