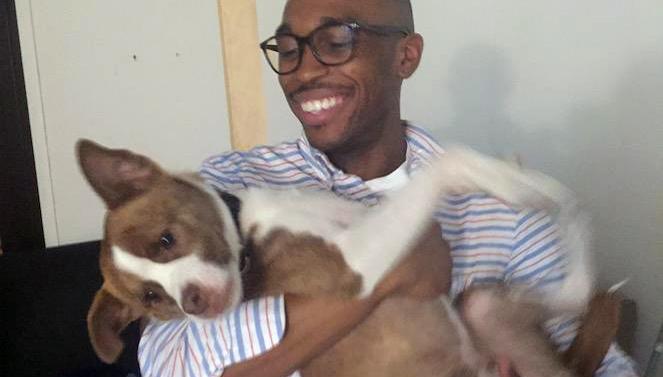 Empty storefront turns into a great place for New Yorkers to meet adoptable pets.
By: Nicole Hamilton on August 03, 2016

Vacant storefronts are full of possibilities for Best Friends–New York. With just a little effort, these unoccupied spaces can be transformed into places where homeless pets get a second chance and pet adopters find their perfect match.

That’s exactly what happened when Sparky the dog met Turé, who stopped in to the most recent Best Friends–New York pop-up adoption event held at a storefront on Fifth Avenue.

Turé had wanted to adopt a dog ever since he moved to New York six months ago. A self-described shy guy, Turé thought a dog could help him feel more comfortable meeting people and making new friends in his new city.

Recently, he started checking the Best Friends–New York website for the perfect dog to adopt, and he decided to stop into the pop-up adoption on Friday after work to meet the dogs in person. As soon as he walked in and saw a Jack Russell terrier named Sparky, he knew his days of being shy in the city were numbered.

“I just looked at him and said you are gorgeous,” says Turé. Sparky is friendly and sociable — a perfect dog to help draw Turé out of his shell. “He was clearly the dog for me,” Turé says.

Sparky came to the pop-up adoption as a homeless pet, but when he left that evening he was a dog with a forever home. Today, he and Turé are having a great time together exploring New York on walks and visiting dog parks.

A natural extrovert, Sparky sees all strangers as friends yet to be made, and this has opened up a whole new world for Turé.

“He is one of the smartest dogs I’ve ever known,” says Turé of Sparky. “Every day, I tell myself how lucky I am to have found him.”

Hundreds of people came by the recent pop-up adoption to check out adoptable homeless pets from Best Friends–New York, all of them originally from Animal Care Centers of NYC and Posh Pets, a Best Friends rescue partner.

And while dogs like Sparky were there to find homes, a main focus of this most recent pop-up was Best Friends’ adoptable homeless cats. “We call this the summer of cats,” says Jess Bergeron, event specialist. “We wanted to give them a lot of love up front.”

And that they did — literally.

The pop-up area was arranged so that the first thing for visitors was walking through the area with adoptable cats before making their way to the dogs. The event was a success for both dogs and cats who were ready for new homes, with a total of 32 pets adopted.

The pop-up also featured prize wheels, a photo booth and even an impromptu concert by a drum band that had been playing down the street before marching to the pop-up, where they created a festive vibe by playing just outside the doors.

“The pop-up was a lot of fun,” says Jess. “But mostly, it was a way to bring together the New York community and build momentum in saving the lives of our homeless pets.”

Find your own Sparky to love.