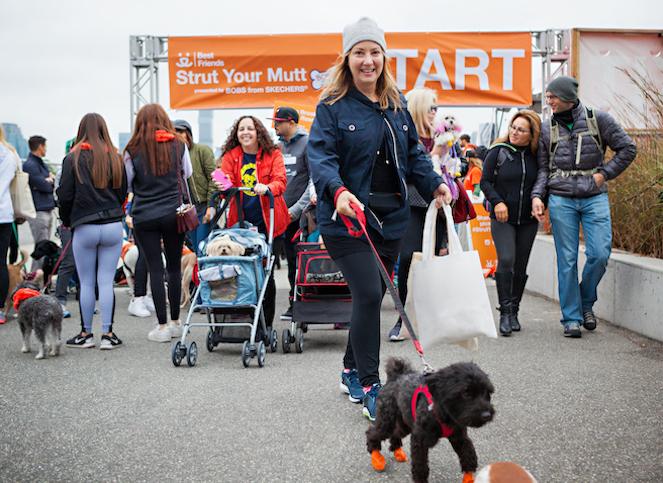 This year was the most successful New York Strut Your Mutt yet.
By: Nicole Hamilton on October 12, 2016

It may have been a rainy, blustery day for an outdoor event in New York City, but that didn’t stop attendees from showing up in record numbers. This year’s New York Strut Your Mutt, presented by BOBS from Skechers, with additional support from Nature’s Variety, Too Faced Cosmetics, and local sponsors Barefoot Wines & Bubbly and Sixpoint Brewery, raised nearly $300,000 for 38 participating local network partner groups.

Nearly 1,700 people and more than 1,250 dogs participated in the walk and festival at Hudson River Park, where Pier 26 was transformed into the perfect playground for both dogs and the people who love them. Dogs could play and even relax with a “pawdicure,” with a view of the beautiful skyline in the distance. There were kissing and look-alike contests, and lots of visits from celebrity supporters, such as Dann Florek of “Law & Order,” Rob Marciano of “Good Morning America,” and actors from “Orange is the New Black.”

Strut Your Mutt fundraising is open through October 31. Donate today.

"The turnout this year was fabulous,” says Elizabeth Jensen, executive director of Best Friends–New York. “And it is so exciting to know that these same caring strutters will very soon have a chance to strut right on in to our SoHo Pet Adoption Center. Our new Best Friends Pet Adoption Center will make it possible for us to create even more lifesaving opportunities for New York’s homeless pets.”

For organizations like Long Island Bulldog Rescue, Strut Your Mutt is very important, because it helps raise the funds essential for the organization to save more lives. This year, Long Island Bulldog Rescue was the top fundraising group at the New York Strut Your Mutt, and director Dean Barry says it’s one of the group’s biggest fundraising opportunities of the year.

“We love taking part in Strut Your Mutt,” says Dean. “It’s just an amazing event. Every year since we began participating, we’ve raised more and more funds. It’s something we look forward to.”

Give them a chance. Foster a homeless pet.

A little rain couldn’t keep Jennie Tichenor and Lizzie (a therapy dog in training) from taking part in Strut Your Mutt. Jennie adopted Lizzie from Best Friends–New York after the three-legged miniature poodle who was found homeless on the streets. Lizzie was picked up by Animal Care Centers of NYC looking tattered, dirty and scared, but today she’s a new dog and her sad past is far behind her.

In fact, before arriving at Strut Your Mutt, she made an appearance on “Good Morning America” to promote the event. She’s also appeared a recent calendar for the New York Liberty professional basketball team.

“Strut Your Mutt makes it possible for dogs like Lizzie to have a second chance,” says Jennie. “We wouldn’t miss it. Best Friends is doing some herculean work and we want to support it.”