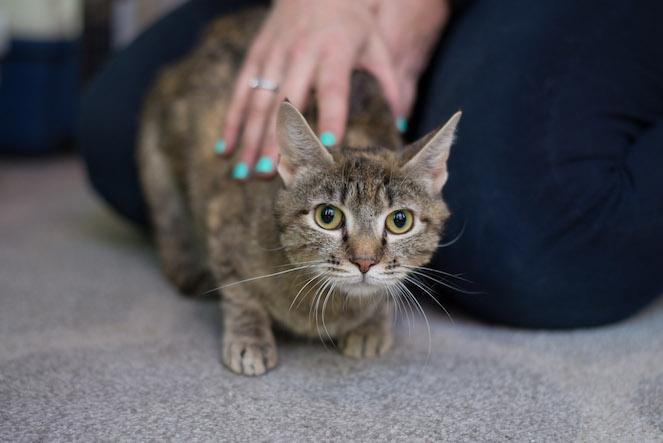 Jill Strauss absolutely adored Amber, her 14-year-old male orange tabby, who shared an apartment with her in New York City. Outgoing and affectionate, Amber was the kind of cat who could command a room, and when he passed away last summer, Jill was heartbroken.

She decided that welcoming a new cat into her home would be a perfect New Year’s resolution that would also allow her some time to grieve. And she decided that her next feline companion would be a petite female kitty who might even lean toward the timid side.

“I wanted a cat who was very different than Amber,” says Jill. “It was a way to honor him, but also a way to start over with a cat who maybe saw the world a little differently than he did.”

The months flew by and soon New York was awash in holiday lights. With New Year’s Eve swiftly approaching, Jill knew she needed to quickly welcome a new cat into her life if she was going to make good on her resolution. Still, she wasn’t sure she was ready. She still missed Amber.

One day she decided to pay a visit to PetSmart in Harlem, just to see if any cats there (all from Best Friends–New York) caught her attention. That’s when she first saw Cammy. She loved Cammy’s face, which she described as “all eyes.”

Jill decided to think over the big question and left PetSmart without Cammy. But by the time New Year’ Eve rolled around, she realized that when she saw herself with a cat now, it wasn’t Amber who came to mind, but Cammy. That’s how Jill knew she was ready to open her heart and home again to a deserving pet. There was just one issue: it was New Year’s Eve and Best Friends didn’t have cats at PetSmart that day.

Jill contacted the Best Friends adoptions team, which worked quickly to find a volunteer for a special trip to bring Cammy to the Harlem PetSmart so that Jill could fulfill her New Year’s promise. Luckily, volunteer Arlene Dolinko, stepped up to help.

“It’s volunteers like Arlene who go the extra mile, who make such a difference for animals in New York,” says Maria Hertneck, volunteer specialist for Best Friends–New York. “When I heard Arlene was going to make the special trip, I wasn’t surprised.”

Arlene met Jill at PetSmart and formally introduced her to Cammy, who like all pets with Best Friends–New York, had lost her home and ended up at Animal Care Centers of NYC. Cammy was at first shy and timid, but Jill didn’t mind. In fact, Cammy’s sweet and gentle disposition made Jill love her more. As she got to know Cammy and talked to Arlene about her, it became clear that this would be a New Year’s Eve to remember, because Cammy was finally going home.

“There’s nothing better than seeing a pet go to the perfect home,” says Arlene. “I knew Cammy would be very happy with Jill. I’m just glad I could be a part of making the adoption happen.”

Cammy, now called Camille, is tiny compared with the cat Jill had for so many years before. But in just a few weeks, she’s already made a big impression on Jill’s heart. “I just love her and how kind and gentle she is,” says Jill, who made Camille a cozy spot in the bathroom on her first night home, only to find Camille leaving it immediately so she could explore her new surroundings.

“She settled in quickly, which I take as a good sign,” says Jill. In fact, as Jill spoke, Camille joined her on the couch when she heard her name. “I’m just so grateful to Arlene for going out of her way to make the adoption happen before New Year’s.”

As it turns out, it was a day to remember for Arlene, too. “It was the best New Year’s I’ve had in a long time.”