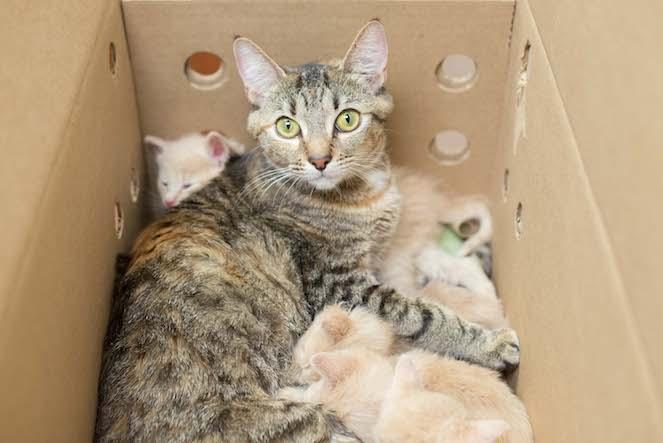 Izabelle is a kitten mama extraordinaire, and now she’s finally got help.
By: Nicole Hamilton on April 12, 2017

Being a single parent of one can be exhausting. Imagine being a single parent of more than a dozen little ones. That’s the tale of one mother ― Izabelle ― a tiny tabby cat with a Herculean-sized heart, who stepped up like a superhero to nurse more than a dozen hungry kittens. But even superheroes need a break. And luckily for Izabelle and her babies, help was on the way.

Izabelle was surrendered by her family to Animal Care Centers of NYC (ACC), along with 14 kittens of various ages she was nursing at the time. She had been living with two other female cats in a very full house before coming to ACC. In fact, three cats in the home ― including Izabelle ― gave birth to litters of kittens around the same time. Her fellow new mothers, however, were finding it difficult to nurse their babies, so Izabelle did it for them.

Overwhelmed with too many cats, Izabelle’s owner brought her and the 14 kittens (some just nine days old) to ACC. While people often take kittens to shelters, thinking it will be easy for them to be adopted, that’s not the case when kittens are just a few weeks or only a few days old.

Kittens don’t start eating on their own until they’re several weeks old, and they can’t be spayed or neutered until their weight is at least two pounds. That’s usually not until they are more than eight weeks old. So when kittens arrive at a shelter much younger than that, the shelter staff knows it will require weeks of care and valuable space to house them until they are ready for adoption. While kittens are usually adopted very quickly, it takes a lot of time and work to get them ready for their big day.

In the case of Izabelle and her kittens, Best Friends was able to help by taking in the sweet mama cat and all 14 kittens from the city shelter. 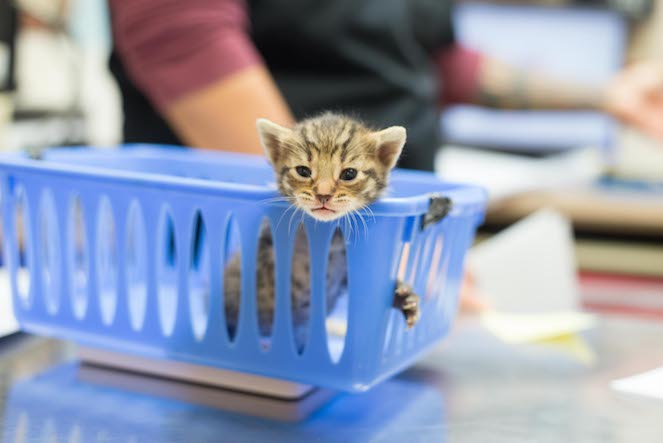 Help for a supermom

Soon Izabelle and her kittens were on their way to a veterinary checkup. There, the mom was given fluids to get her hydrated, and she also got something else every single mom covets: a little R&R.

The vet concluded that all of Izabelle’s hard work had paid off. All of the 14 kittens she was nursing were healthy and growing ― no easy feat. To Izabelle’s relief, a few of the kittens were old enough to be weaned and placed on a diet of wet food. A couple more were able to be transitioned to bottle feeding and two others went to a foster home, leaving Izabelle with eight kittens to nurse.

“Izabelle saved the lives of these kittens, and now we are stepping in to help her,” says Shannon Kirkman, Best Friends foster and adoptions coordinator in New York, who will never forget the look on Izabelle’s face when she first saw her lying in the box, surrounded by hungry kittens. Shannon says, “It was the look of an exhausted mom who just needs a break.” 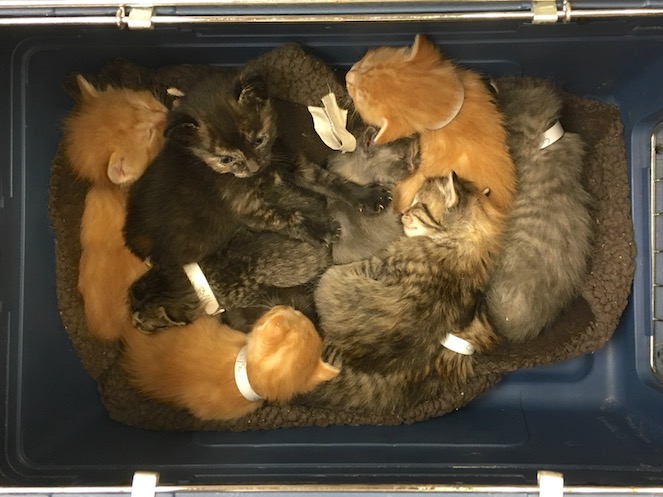 Izabelle is feeling better now that she is nursing eight kittens instead of 14. The next step is to get the mom and her kittens settled into a foster home, where she can nurse them in comfort until they can be weaned.

When the kittens are old enough that they no longer have to nurse, Izabelle and the kittens will be spayed or neutered, vaccinated and microchipped. Then, all that’s left to do is find them homes with loving families, where the kittens can grow up strong and this super mom can retire with honor.