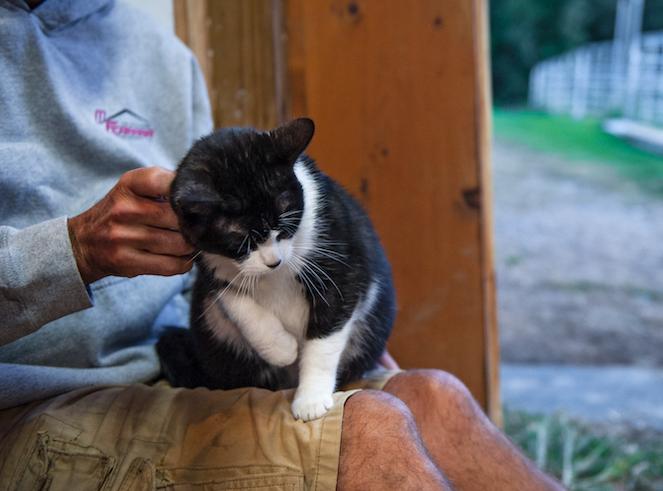 Daisy went from the streets of Manhattan to a barn in Connecticut.
By: Nicole Hamilton on September 28, 2017

Even though Daisy came to Best Friends in New York with a rough exterior, it was hard for her to disguise that, on the inside, she was very sweet. You could tell the black-and-white cat had been through a lot when she first arrived at Animal Care Centers of NYC (ACC) after being found on the streets. In addition to a puncture wound to her abdomen, she was nursing an injured front leg.

That was before a whole team of people worked to find Daisy just the right home. It was the beginning of her transition from city cat to country cat, and she couldn’t be happier about it. 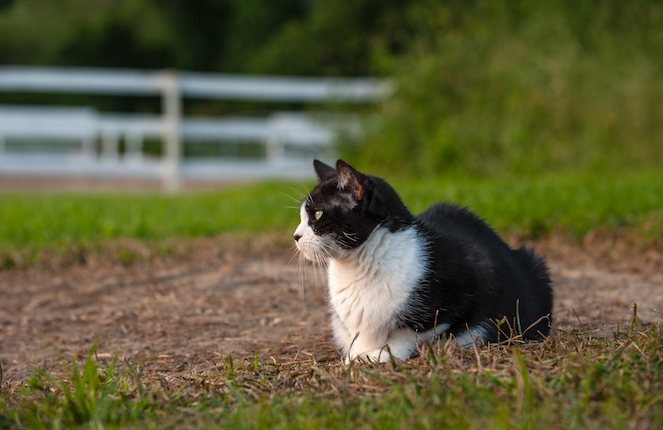 Naturally, Daisy wasn’t up for much company when she landed at the shelter. And while it was uncertain how she was injured, it was clear that it would take some time for her to relax and get used to being around people. Trust was something to be earned from Daisy, and she’d remind you of that by hiding (or sometimes even hissing) when she first met someone.

She needed someone to give her the time needed to let her guard down. And if that could happen, she could look forward to a much happier life. As it turned out, she found many people who wanted badly for her to find a home. These included staff at Best Friends in New York, a sponsor who never gave up on her, and a few Connecticut residents who didn’t know each other personally, but ended up playing a major role in Daisy's new life.

Seeing beyond a cat’s fear

Alisa Matlovsky, a longtime Best Friends volunteer, was the first person to notice a shelter photo of Daisy, looking tired and resigned. Eventually, Best Friends took Daisy out of ACC (where all pets at Best Friends in New York come from) and straight to a vet, where she would get medical care for her injuries. Alisa, who had felt a connection with Daisy since the first time she saw her, wanted to sponsor Daisy and give her every possible chance to have the life she deserved.

As Daisy got better, Alisa stepped in once again to assist the little cat by again by helping to line up a foster home. But when that wasn’t the best fit for Daisy, it became clear that she would need a special kind of home. Since she needs her space, it appeared as though the right home would have to be a spacious one.

Daisy didn’t have much luck at Best Friends adoption events, either. They were just too stressful. When a potential adopter would come over to meet her, she’d retreat to the back of her kennel — nervous and scared. What Daisy needed was a big open area, where she wouldn’t feel forced to be near people if she wasn’t in the mood for attention.  And that might mean a home outside of Manhattan.

Michele is also a dog trainer and foster mom who lives near Newtown, Connecticut, and she often opens her home to Best Friends dogs needing a little extra behavioral training. But her love for animals doesn’t stop at canines. When she heard about Daisy, she had an idea: Perhaps Daisy would be happy as a barn cat. She was right. 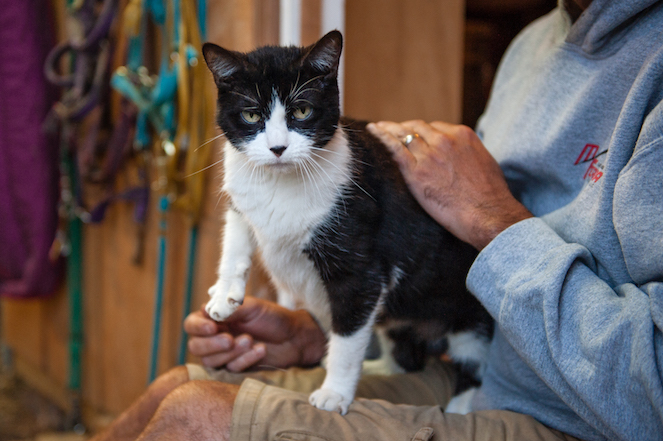 A barn to rest her head

“Some cats like Daisy just need a different scenario,” says Kristin McCormick, adoptions specialist for Best Friends in New York. “In Daisy’s case, we agreed that a barn where she’s well taken care of would be perfect for her.”

It was Michele McLeod, the volunteer, who learned that Michele Santos, another Connecticut resident, was looking for a new feline mascot for her horse barn. Soon, Daisy was on her way to Michele’s barn, which turned out to be her dream home. 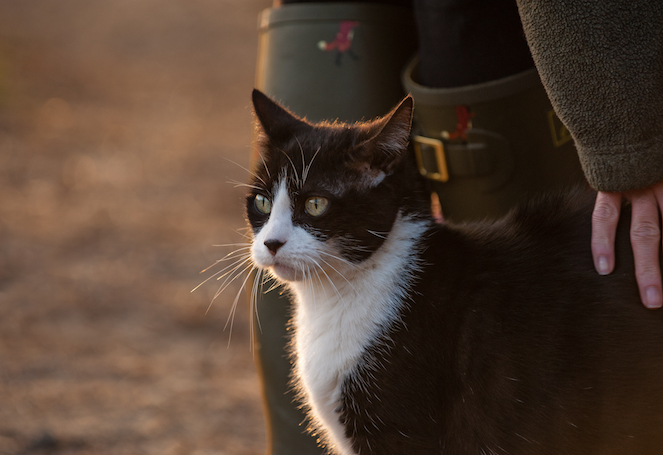 Michelle Santos wasn’t bothered at all by the cat’s shyness. “It was pretty clear that she wasn’t very comfortable around humans,” says Michelle, who had a good feeling that Daisy would enjoy the barn, and that with time she would be more open to human interaction.

To help Daisy adjust to her new home, Michele at first kept her in the tack room. Then, once she noticed that Daisy had let her guard down a little more, she let her out to patrol the barn in the way cats have been doing for centuries. 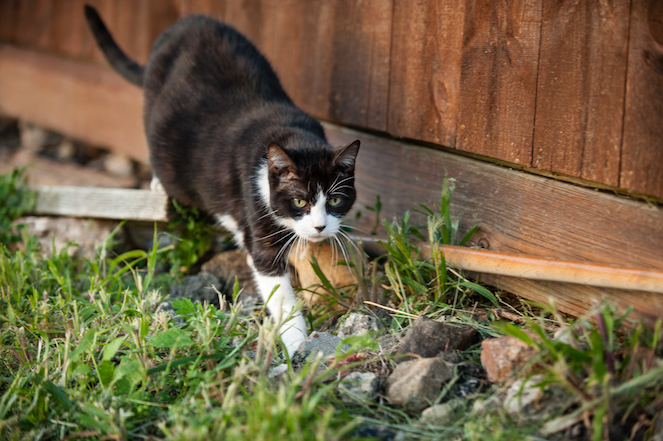 Michele has created a warm space where Daisy can sleep soundly, even when it’s cold outside. And she seems to love the consistency of being fed every day at the same time and having plenty of room to explore the barn and yard. But when she is outdoors she doesn’t go far, because she knows she’s got a good life now. In fact, Daisy has begun to open up to the Santos family by revealing that sweet personality Alisa noticed a long time ago.

“Daisy wants attention, but on her terms,” says Michele, who has loved watching Daisy’s personality unfold. “As long as we respect her boundaries, she really seeks out and soaks up the affection. We have learned Daisy’s language and make sure she feels understood.”