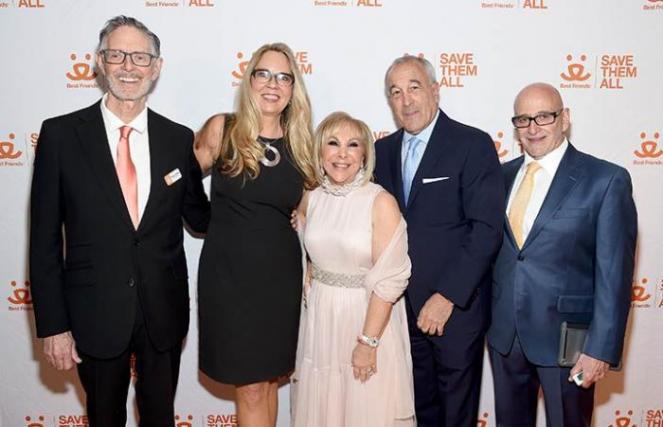 At this year’s Best Friends Benefit to Save Them All, which took place on April 2 in Manhattan, I had the privilege of honoring someone whom I have come to know and respect for her work for the animals. There are people who come into your life who exemplify traits that make you believe all is right with the world. Qualities like generosity, character and kindness define Candy Udell’s life. Candy is president of the prestigious London Jewelers; she and her husband hand-built that company into the premier jeweler in America. Candy uses her position, her connections and her own personal resources to save the lives of dogs and cats, especially those in the rural South.

It bears remembering that Best Friends Animal Society, now one of the largest national animal welfare organizations, began as a group of friends intent on saving the lives of homeless pets and unwilling to accept that killing was the “necessary evil” that everyone, including the professionals, claimed it was back in 1984.

Fortunately for the animals, the founders of Best Friends weren’t industry professionals. They were just animal lovers who believed that the life of every homeless pet has intrinsic value and they asked a simple question: Why? Why are hundreds of millions of taxpayer dollars being spent to kill dogs and cats rather than spending that money to save lives?

To the professionals, the founders were part of the “lunatic fringe,” but in fact that fringe was much more in tune with the general public. Thus, the no-kill movement was born, a movement that has changed the face of animal welfare.

Candy is a citizen activist. For more than two decades, Candy has been working to rescue pets from shelters and the streets in areas where there are few services to protect or care for them. Working primarily with Rescue Paw Foundation and local adoption agencies, she has helped to facilitate the rescue and transport of more than 3,000 dogs to homes in the Northeast. Candy networks with other rescuers to find animals from overpopulated shelters in the South, and now has taken on the task of supporting No Dogs Left Behind as they try to end China’s horrendous dog-meat market. Each year, she supports the rescue of hundreds of more pets personally, providing financial support to grassroots organizations working in areas of the country where homeless pets have the greatest need.

She helped establish Rescue Paw Foundation and acts as its principal benefactor through a dedicated line of jewelry sold at London Jewelers and online to raise funds for her lifesaving work. She and her contributors have supported the work of many animal welfare groups, humane education programs and spay/neuter services in underprivileged areas to prevent animals from having to enter the shelter system in the future.

Candy stands at the center of an impressive group of grassroots rescuers and rescue organizations that are making an impact in the areas of the country that need it the most. Best Friends has been working with her to bring together her network of rescue groups and supporters into the Best Friends Network to enhance the effectiveness of all our efforts.

Candy is such a joy to work with. In her mind, there is a solution to every problem. Her generosity, her love of the animals and her collaborative spirit helped make this year’s benefit a record-breaking success.

Candy is a self-made entrepreneur and because of that, she is able to accomplish a lot. But hers is just one example of the kind of citizen activism that we need to end the killing in shelters by 2025. Everyone can make a difference, because as the founders of Best Friends demonstrated 35 years ago and as regular folks across the country demonstrate every day, you don’t need to be a professional to do right by the animals.

Together, we will Save Them All.