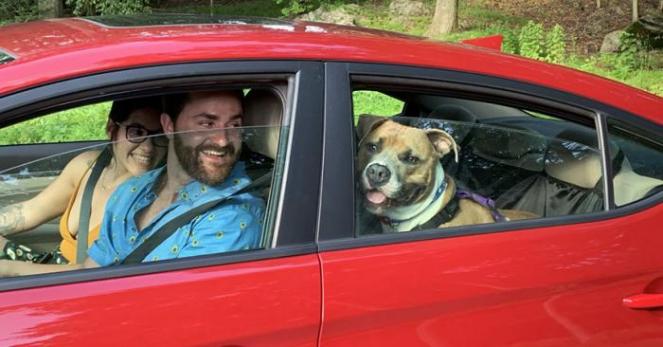 Two dog trainers come together and open their homes to help an enthusiastic dog learn the skills needed to get him adopted
By: Nicole Hamilton on October 03, 2019

Malcolm can find joy in almost anything, which is pretty amazing when you consider that before he arrived at the Best Friends Lifesaving Center in New York City he was living on the streets, emaciated and tired.

After being examined by a Best Friends veterinarian, it was determined that he wasn’t sick — just skinny. Once he received good care and feeding, he looked and felt a whole lot better; however, feeling good brought the sweet dog yet a new challenge.

As his strength increased, Malcolm had a hard time reining in his enthusiasm about, well, everything. And although he’s the kind of guy who’s happy almost anywhere, some places are just naturally a better fit for him than others — thanks to a physique that’s as big as his personality.

After a couple of weeks at the center, the team could see Malcolm needed more room to roam, so they contacted Michele McCloud, a professional dog trainer who has fostered other big, rambunctious dogs at her farm in Connecticut. Michelle agreeing to foster Malcolm was his golden opportunity — and a big step toward adoption. 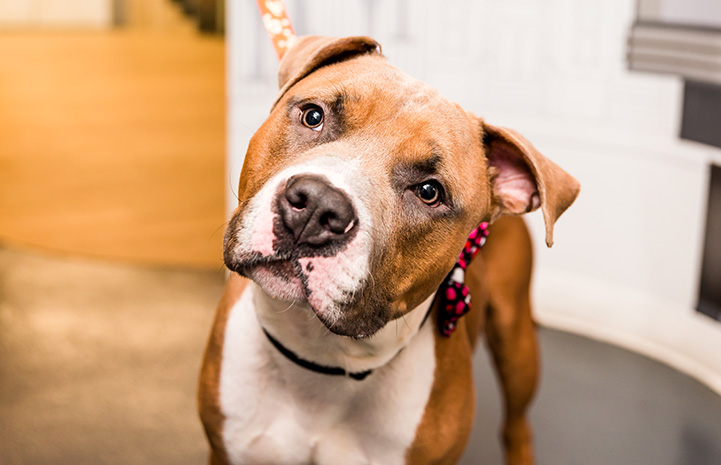 As soon as she met Malcolm, Michelle noticed how trusting he was of everyone he met, despite his difficult past. “That’s what so incredible about Malcolm,” says Michelle. “He trusted Best Friends. He trusted me. He just believes in people.”

Malcolm’s level of trust in people was sky high, but so was his energy level. At the center, he was either a fun-loving goofball or overly excited and mouthy. So, the first thing that Michele worked on when he came to stay with her was mastering impulse control.

When Malcolm got too excited, he grabbed the leash or someone’s sleeve which, to him, was all good clean fun. So, Michele taught him to curb that enthusiasm a bit so it didn’t deteriorate into undesirable behaviors.

“Malcolm learned to stay calm and focus, and then he got a reward like a treat, a sniff at bushes or other objects, a chance to play or a chance to say hello to another person,” she says. 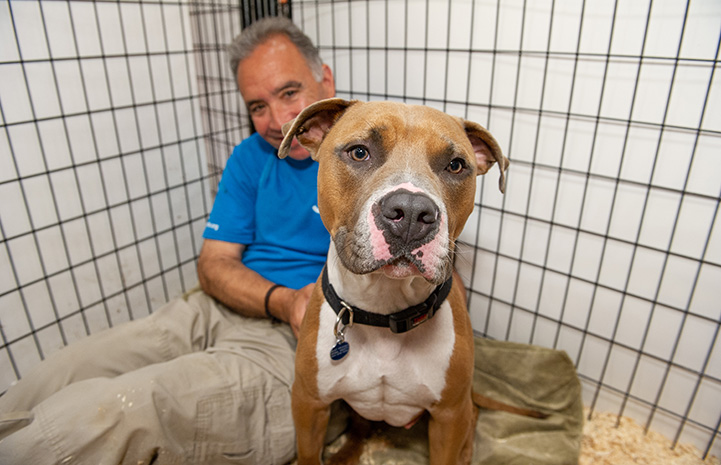 When two dog trainers are better than one

Malcolm quickly proved that’s he’s a fast and eager learner and mastered skills and manners so well that he would’ve have been welcomed at any posh, dog-friendly dinner party in the Hamptons. Despite this, potential adopters didn’t show much interest because, as Michelle says, “People were afraid of his size and his face.”

Caretakers decided to continue Malcolm's education by having him learn from a second trainer. Longtime volunteer Peter Vega agreed to have Malcolm come to his house to continue his training.

“Malcolm can be a bit of a ham, but he’s a very good boy. He’s got a good soul,” says Peter, who with the help of his dog, Brody, honed the skills that Malcolm learned Michelle’s place.

“The very best trainer is another dog,” says Peter, “and Brody did great with Malcolm.” 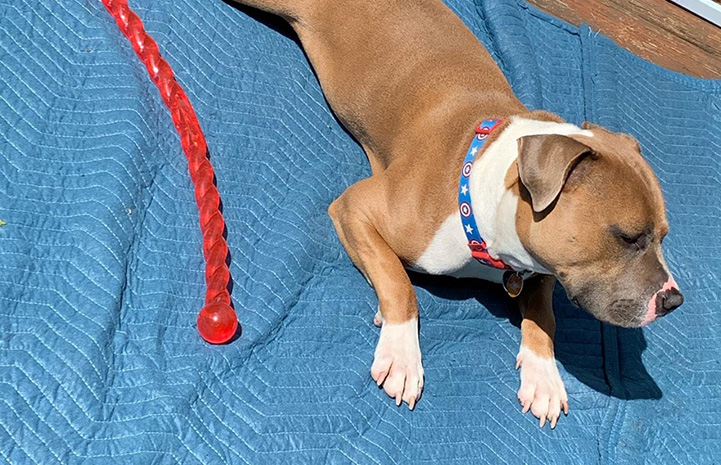 Group effort to get the word out about Malcolm

While Peter (and Brody) fostered Malcolm, Michele continued to circulate a small flyer she created at local pet supply stores and veterinary offices. She also distributed it at the local creamery, which is where a similar flyer on Tyler, another dog from Best Friends helped by Peter and Michele, who was eventually adopted by Jaclyn Gartner, was displayed.

In fact, it was Jaclyn who helped Michele create an Instagram page for Malcolm (@findmalcolmahome), and it was Tyler who became Malcolm's mentor by helping him learn how to walk politely on a leash next to another dog.

Missy Parker, lifesaving support service lead for Best Friends in New York, says it’s a wonderful thing when volunteers and fosters bring special skills to the table to help pets find homes: dog training, marketing, and networking, to name a few. With so many ways to help pets get adopted, sometimes all it takes is a handful of people to just keep trying everything until the message gets to the right family.

“Our volunteers are eager to show their support any way they can and we are so unbelievably grateful,” says Missy. “Every act, no matter how small, makes an incredible difference.”

It was the flyer created by Malcolm's fans that caught the attention of Amanda Hernandez and her husband, Derek. They were in the process of buying a home with a big backyard that was missing one key ingredient — a dog to enjoy it. 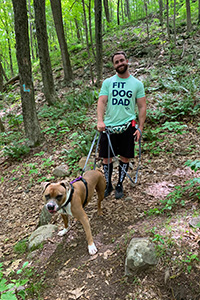 Amanda and Derek met Peter, Michele, and Malcolm at a large dog-friendly outfitter, where they could see how well-behaved Malcolm was in busy public places amid all sorts of things that could divert his attention.

He was a perfect gentleman during the meeting, and to Amanda and Derek he wasn’t too big, too strong or too energetic. He was perfect. “I just thought he was so handsome,” says Amanda. And with that, Malcolm had a new home.

Michele and Peter accompanied Malcolm the day he went to live with his new family, and when they got up to leave, Amanda remembers Malcolm’s surprised look when he realized he wasn’t leaving with them. “I think he thought he was just visiting,” says

Amanda. “At first he was really excited, but then he cuddled up next to us and slept for the rest of the day.”

Now Malcolm spends a good part of his day playing in his big backyard. He cuddles up next to Amanda and Derek in the evening, and then he crashes in bed with them. In fact, they got a really big bed specifically for Malcolm.

Malcolm’s overly enthusiastic tendencies still come out from time to time, but that doesn’t worry Derek or Amanda (who changed Malcolm’s Instagram page to @malcolmsworld).

Malcolm recently stayed with Michelle while Amanda and Derek had a housewarming party. As soon as he saw Michele, he hopped in the car just like the old days. Then, when Amanda and Derek came to get him, he ran to them with his tail wagging.

As Michele watched Malcolm bound toward Derek and Amanda, she knew his life had come full circle. “He’s what I call a heart dog,” says Michele. “He has a big heart and is so trusting. He forgives and forgets, believes and trusts. I knew then that he’d be fine.” 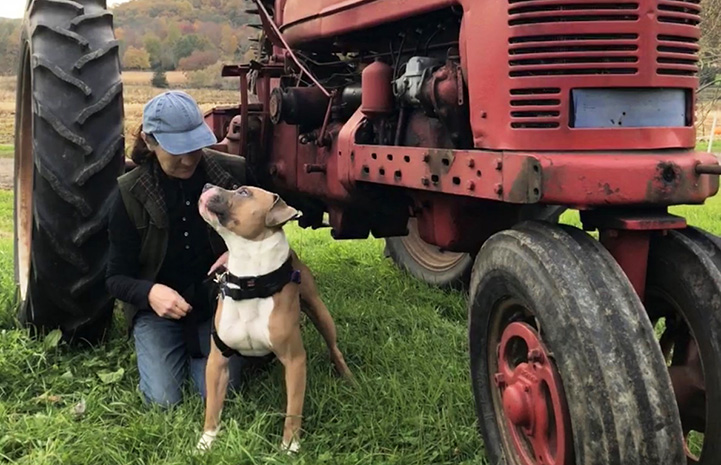