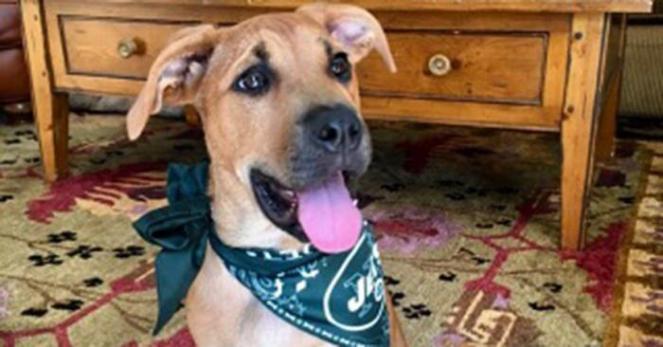 For Danielle and Brian, going outside their comfort zone and against their initial plans paid off in a big way
By: Laura Reindel on January 17, 2020 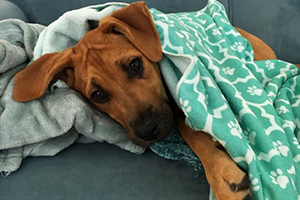 “The best laid plans of mice and men often go awry.” This classic quote from John Steinbeck’s “Of Mice and Men” may be the best way to describe how Melo, a snuggly puppy, ended up with Danielle and Brian. The New York city couple decided to foster together through Best Friends, and it changed everything for them.

“I've always been passionate about volunteering for local shelters (I did when I was younger as well) and knew that I wanted to help,” says Danielle, who was eager to foster but also had her doubts — namely, that Brian never had a dog before and, well, he was allergic to them.

Because of Brian’s allergies, she thought the only kind of dog she’d ever be able to have would be a nonshedding “doodle” type. But she was eager to try fostering a pup in need short-term. So, they made their way to the Best Friends Lifesaving Center in New York to pick up Melo, who had just arrived on a transport from Atlanta. Melo had instant enthusiasm for his new foster family. “He was so excited with his little wiggle butt when he met his fosters,” says Missy Parker, lifesaving support services lead at Best Friends in New York. 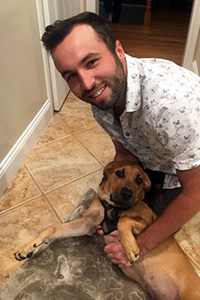 When Danielle and Brian brought Melo home, though, the happy little pup was completely overwhelmed. “I tried to give him a bath, but he was shaking from fear,” Danielle says. “We also tried to feed him, but he wouldn’t eat.”

Feeling helpless, Brian and Danielle decided to call it a night by setting up a crate with piles of blankets right next to their bed. Melo ended up sleeping for 12 hours straight without making a sound. “He must have been exhausted,” Danielle said.

The next morning Brian and Danielle discovered a completely different dog. “Melo woke up with his tail wagging, giving us kisses and he ate his entire bowl of breakfast before he started exploring the apartment. I think I fell in love as early as that morning.”

Best of all, Brian found he could keep his allergies at bay with an over-the-counter daily tablet. It didn’t matter that Melo wasn’t a fancy purebred or hybrid, nonshedding pup after all. 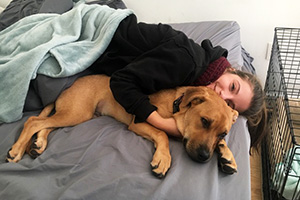 This eager new foster family wasted no time exploring New York together. They frequented the park, a nearby pet supply store and the West Highway running path. Melo would start to pull on his leash a little bit when he knew they were getting close. It wasn’t long before his adorable personality started to develop. Danielle says, “When he gets super excited, he can't help but wiggle his bum so hard that he sometimes falls down. If he gets really excited, expect a small tinkle.”

Melo is also a big fan of public displays of affection and any dog that’s his size or bigger will get more kisses than they know what to do with. Along with helping Melo discover his new environment, Brian and Danielle took the time to make sure he was the most well-behaved pup on the block. Missy explains: “Danielle and Brian are the exact foster parents you want in your program. They worked hard to help Melo with his training.”

A new outlook on adoption 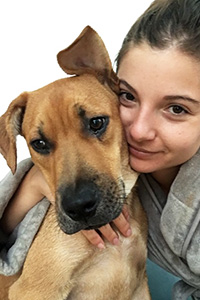 It wasn’t long before Danielle and Brian decided that Melo wouldn’t be going anywhere. They wanted to adopt him. Except, they had some competition — from Danielle’s own parents. “Our entire family fell in love with Melo, and my parents actually wanted to keep him, too.” she says.

Even though Melo stayed with Danielle and Brian, everything worked out for the best. Danielle’s parents ended up adopting another dog named Rupert, who Melo adores. “They’re absolute best friends and Melo cries when he gets into their driveway because he’s so excited to see him,” says Danielle. Adopting Melo through Best Friends has totally changed her views on how and where to acquire dogs. “Now I’ll only ever adopt rescued dogs,” she says.

Though Brian will have to keep taking a daily allergy pill, it’s a small price to pay for their new family member, who Danielle says “is totally worth it.” Melo, Brian and Danielle are enjoying life together, even if it looks a little different than what they had previously envisioned.

“We agreed we’d take it slow by fostering, so Brian could get a taste of what dog ownership was like before making a commitment,” says Danielle. “Whoops! That didn’t work out exactly as planned.”