Senior Chihuahua struts his best self on the Upper West Side

A sensitive, quirky Chihuahua teaches his foster mom how to live life in the present
By: Lindsay Hutton on August 27, 2021

Lucky Chucky Lynch is his name and looking fabulous while strutting on the Upper West Side is his game. This nine-year-old Chihuahua has a handful of nicknames: Chuckerbutt, Mr. Chuckles, Sir Charles, Little Booboo or Stinky (his dog breath) Booboo. But Lucky Chucky Lynch is both his official name and (jokingly) his "crime" name. How did Chucky get so lucky? How did he go from shaking in his crate to gazing at the new day rising over Central Park? Like Chucky himself, this is a story with layers.

For 11 and a half years, Meg Lynch, a dog trainer and owner of her own pet services business, loved and lived with a 70-pound foxhound mix whose mutt status led to playful breed suggestions like “beagle on stilts” and “greyhound in a beagle costume.” Whatever her breed, Abby Road (named after the Beatles’ song but without the “e” for originality) was Meg’s girl, sweet and well-trained. Her passing in the summer of 2020 left a hole in Meg’s life.

In the wake of Abby’s death and the pandemic, Meg saw fostering as a way to consider what it would be like to have a dog who wasn’t Abby. She contacted Best Friends, thinking that a dog needing foster care would match up with her skill set. As a trainer, she had worked with challenging dogs to earn their trust, and (personally) rescuing was always close to her heart.

[Once paralyzed puppy ditches his wheels]

So, she opted to take in Chucky, who had lost his family in the pandemic. Emily DeFelice, Best Friends supervisor of lifesaving outcomes for the Northeast region, says that Chucky was a “sensitive and particular” dog with his guard up. He got nippy and had accidents when startled. At Best Friends he was diagnosed with dental disease, cherry eye and anxiety. No doubt he would be a challenge. But more than that, his experience spoke to Meg: He had already been placed in (and returned from) several foster homes and had gone through more than one failed adoption.

When she saw Chucky’s profile, Meg asked her roommates for permission to take him on as a foster. They agreed. It would later be those same roommates who nicknamed him “The Chucky Doll” (a reference to the character in the horror films). And he was indeed a challenge. He wouldn’t wear a harness, wouldn’t tolerate clothes during the cold and peed when he was nervous. He was terrified of men and of leashes.

On the day Chucky arrived at Meg’s, his transporter was a man, so he was already upset. As soon as Meg opened the crate, he ran to the coffee table, peed on it and then ran up Meg’s skirt. In retrospect, she recalls this as the moment Chucky decided that he was her dog, though she wasn’t as quick to draw that conclusion. Instead, she was more worried about potty training and asked herself, “What have I done?” But she also observed that the dog was scared, had run up her skirt in search of safety and did not want to leave.

That day, it took both Meg and the transporter to get a collar on Chucky so that she could take him outside for some exercise and help him work out his fear and nervousness. She came to understand that he hated for his neck to be touched by the metal connecter on the leash, and he also hated to have a dangling tag attached to the collar.

[A dog who loves her muzzle?]

One of the first things she did was buy him a collar with his name stitched into it. Over time, he got better and started to let down his guard. Eventually, she could put a collar on him with no problem, put her fingers in his mouth and touch his paws.

As Chucky became less fearful and guarded, Meg noticed that he would walk up to one roommate, but clearly ignore another. This was a dog who wasn’t looking to appease. He was particular about who and what he liked, and he would let you know. Meg wasn’t looking to change any of that (even though it was a bit embarrassing how Chucky would openly disdain the one roommate). 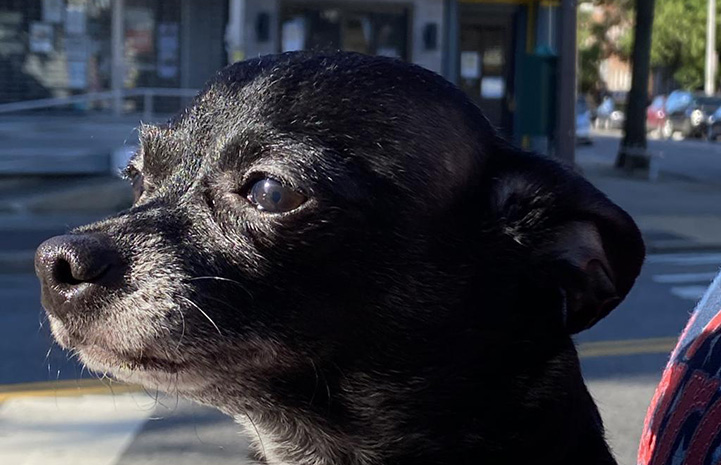 See the dog, not the problem

Meg's connection with rescued dogs is rooted in her own experience. When she was 10 years old, her mother died. Multiple family members took her in, decided that “it was too much,” and passed her to other family members. Eventually, she was adopted by her mother's best friend.

Since Chucky lost his family during the pandemic, was foster-rejected a couple of times and returned after a failed adoption, Meg identified with him. She recognized the situation: For each step forward, there were two steps back. So, when he came to her with what some might see as many problems to be fixed (and she was the dog trainer to fix them), she didn't look at the problems as much as she looked at the dog. She made a choice: She wouldn't try and fix anything. She would do something else.

Meg’s mission was simple: She wasn’t going to try and “improve” this dog or train away some of his quirks and issues. She was just going to love him and that was all. That would be going against all of her dog training experience, which focused on training as the key to giving such dogs a chance for a better life. Her sweet Abby had been trained to urinate on command. But Chucky? Chucky would pee on her shoes or in her arms, and her response would be — whatever. 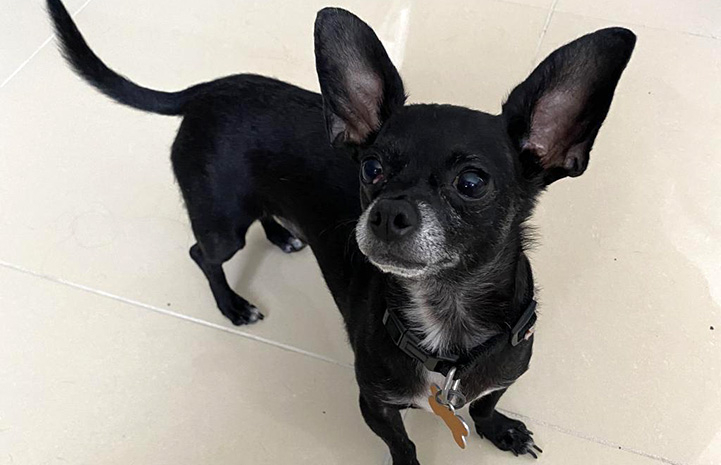 In November when Meg took Chucky in, she thought the adoption would be completed by Christmas. But when the holiday arrived, he was still in her care and she was going to be gone for eight days of travel. During that time while Chucky stayed with another foster, Meg found herself texting regularly, asking how he slept and how he was eating. Though they weren’t together, he was on her mind, and when they were reunited, he was ecstatic.

As the day marking the 25th anniversary of the death of Meg’s mother approached, she thought about how she could make it more significant than just a tough milestone. She thought about how Chucky had recently gone with her on a dog sitting trip to Brooklyn, how amazing he’d been with her client’s dogs, how well he’d shared attention and how well-behaved he was overall.

She thought about a friend’s response to her comment about maybe keeping Chucky. (“Of course he’s your dog! He’s been your dog!”). She thought about how much she related to Chucky. She’d had him for four months. She had waited and watched to be sure that he was comfortable living with her. Now she was sure.

Meg decided she would commemorate that 25th anniversary by adopting Chucky. Now on that day, instead of focusing on the pain of losing her mom, she’s with the dog who’s helped her heal and taught her about living in the present. 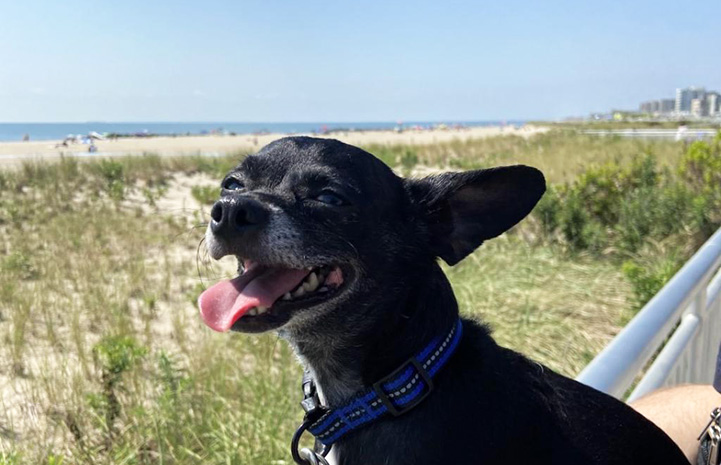 The Chihuahua mom and the King of Central Park

Meg and Chucky now live in a studio apartment on the Upper West Side near Central Park. Since making the adoption official, She says he has been much more confident. For example, he has stopped biting her toes in bed when she accidentally touches him during the night, and he rarely has a nervous or protest pee.

Chucky loves to go for rambles in Central Park and her worry over whether he would ever be able to interact normally on the street is just a memory; however, her mission is still the same — to just love Chucky and let him be himself. Meg notes that she’s still discovering who Chucky really is.

“Chucky’s like an onion,” she says. “I don’t know that I’m going to get to the purest core of who he would have been if he had a stable loving home from the beginning, but he keeps surprising me.”

[A dog’s journey from leash reactivity to belly rubs]

While it used to be necessary for Chucky to occasionally stay in his crate, he is now out and free to lounge about all day in Meg’s bed. He has started chasing birds and shows interest in squirrels. He still only plays with green toys, and he entertains himself with games of soccer by kicking a little ball around. When he is nervous, he elevates his hind leg and puts it in his mouth and sits there.

“Now he’s just a happy little dude,” Meg says. “It’s amazing what love and consistency will do for a dog.”

Amazing, too, is how relationships with dogs can dramatically impact our lives. Meg says that as she accepted Chucky’s behaviors, she realized that maybe she didn’t have to have such high standards for her friends or for herself. The discovery has made her more compassionate.

One ramble in Central Park at a time, Meg’s relationship with Chucky continues to unfold and reveal new layers. 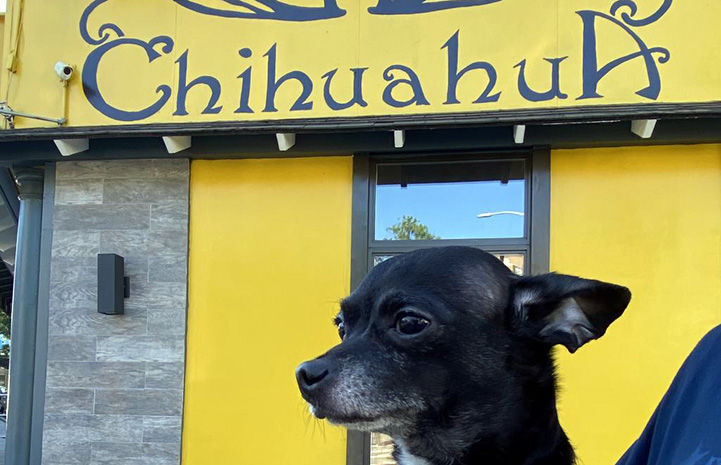 Give them a reason to strut

Foster dogs from your local shelter because it will put a spring in their step and may just help them get adopted.

Visiting pooches a big hit at Navy base