Seeing past a kitty’s shyness 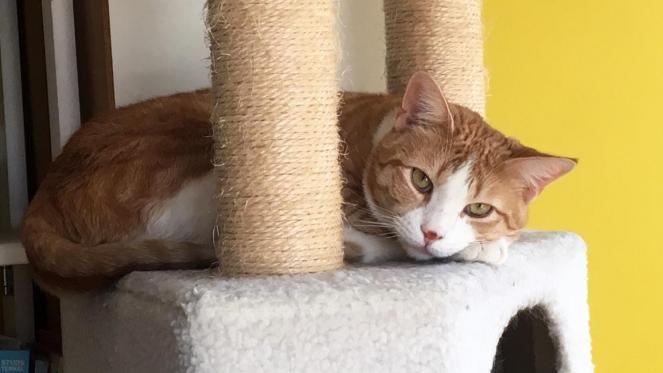 Willow was scared when he arrived at Best Friends, but one New Yorker saw the brave, bold cat he truly was.
By: Tracy Blowers on June 21, 2022

Sometimes all it takes is one person to change your life for the better. Take Willow the cat, named for the beautiful willow tree. Today, his personality and confidence grow a little more each day, but that hasn’t always been the case. In fact, back when Willow first arrived at Best Friends in New York from Animal Care Centers of NYC, the orange tabby wasn’t thriving, due to an awfully upset stomach. And the fact that he was extremely shy and fearful in his new environment wasn’t making life any better.

A veterinarian examined Willow and determined that his digestive issues could be helped with a special diet. Then Willow went to a foster home, where his tummy troubles eventually began to subside. His shyness, on the other hand, would take a lot more time to overcome. Once he was feeling better, he settled in back at the Best Friends Lifesaving Center.

The team set up Willow in his own space where staff and volunteers could sit with him, in hopes of helping him come out of his shell. He had comfy beds, toys and even entertainment. Diane Mancher, the Best Friends supervisor in New York, says, “He had his own iPad to watch bird and squirrel videos.”

After a few months of daily attention from people, Willow began approaching staff and volunteers to take treats from their open palms. Although he had a way to go, everyone who knew Willow hoped that an adopter would see beyond his timidity and give him a home where he could put down roots and flourish. 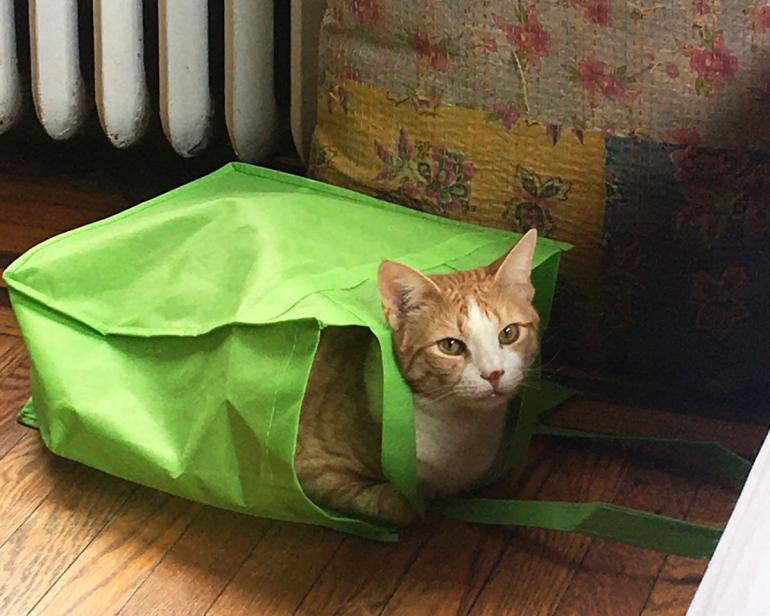 Willing to go the distance for a shy cat

Meanwhile, Jill Sigman, a performer and interdisciplinary artist living in New York City, was dealing with her own challenges, largely due to the fact that she needed to be away from home frequently to help family. Although Jill always made sure that her cat, Casey, was well taken care of when she was gone, she could tell that Casey was a little lonely. That got her thinking: What if Casey had a feline friend around to make their time apart a little more fun?

So, Jill went to the Best Friends Lifesaving Center to meet some cats. Diane introduced her to Willow, letting her know that even though he was still shy, he had come far since he’d arrived.

As luck would have it, after previously adopting a shy cat and helping her go from scared to social, Jill is a bit of a cat whisperer. She could envision Willow’s transformation because she knew it was possible and understood that it would take time. She says, “He hid behind a bench during our first visit and wouldn’t let me touch him, but I kept thinking about him after leaving.”

Jill kept visiting Willow just to sit with him and keep him company. He would come out to eat small cat treats off her finger, as he had done with others, but then would go back to his hiding place. Eventually, though, something extraordinary happened: Willow trusted Jill enough to allow her to touch his paw. It was a brief moment but a huge step. It was a connection that no one else had been able to make with Willow, and it set a friendship in motion.

During Jill’s next visit, Willow made a grand gesture and played just a little bit in front of her. “He studied me for a long time,” she says, “and then did what felt like an artistic performance with his reindeer toy. That was when I felt I understood him.” At that moment, Jill knew she would be the one to give him a home.

Jill prepared for Willow’s arrival by partitioning off a space in her home for him, allowing time for Willow and Casey to be appropriately introduced and get to know each other. She also took the time to create plenty of fun and safe hiding places for Willow. 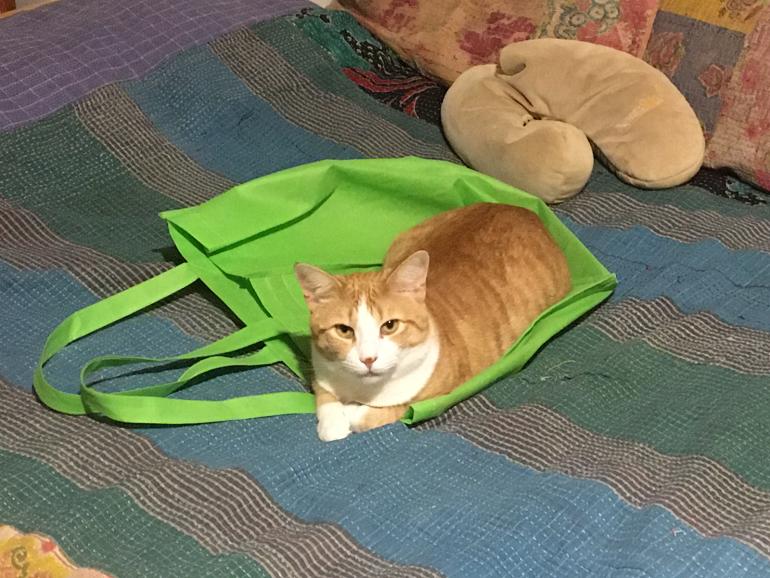 On Willow’s first night in his new home, Jill wasn’t expecting to see him. She didn’t think he would come out from his hiding places. But he did. He ventured out to eat his dinner and continued to do that for the next few days. Then, on day three, he took a flying leap, jumping the hip-high partition to make it out of the kitchen and into the living room.

“It was like Willow had a bad case of FOMO (fear of missing out) and was determined to see what he might be missing in the rest of the apartment,” says Jill. “He started exploring and hid under my bed; it took 12 hours to get him back into the kitchen.”

Not wanting to introduce the cats too soon, Jill added a piece of six-foot cardboard above the partition. But Willow didn’t give up; he meowed, scratched and tried to scale the cardboard wall over the following days. He would even shake it. Once again, with sheer determination, he outsmarted Jill and found his way out when she moved the cardboard for just a moment. This time, she didn’t put him back and carefully watched the two cats’ interaction. Willow strolled right over to Casey and seemed to say, “Hi, I’m your new best friend!”

All of this happened during Willow’s first week in his new home. No one would have ever guessed that he would come out of his shell in such a big way. “He seemed like a different cat. He was much more like a couch potato,” says Jill. “It was all so unexpected. He seemed to feel so at home.” 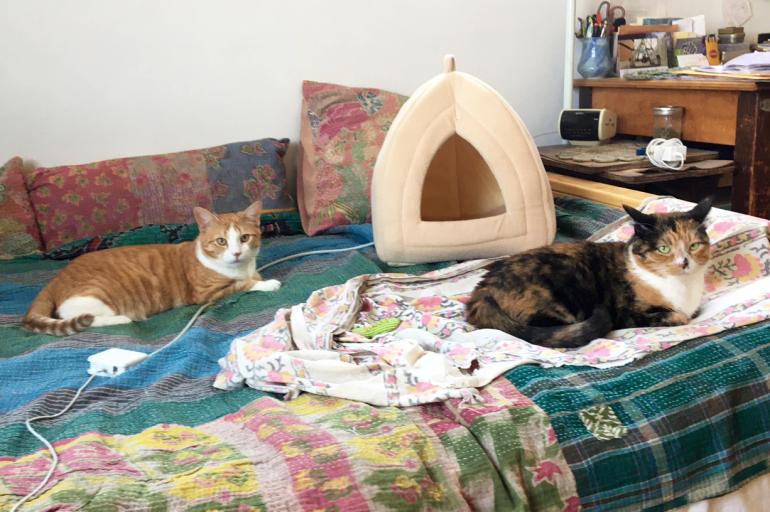 Now, after only a couple of months at home, Willow is much more goofy and outgoing. He has thoroughly explored every part of Jill’s home, including the top of the bookshelves. And even though Willow is older than Casey, he loves to act like a little brother. He follows her around, tries to imitate her, attempts to claim all of her beds and eats her food. When Casey is in the cat tree, he even climbs up to visit her.

That initial small touch between Jill and Willow has developed into him jumping up on the bed while Jill is there; he’s not sitting close, but he is making progress. He absolutely loves catnip and is quite the foodie, which is also a surprise to Jill, considering the digestive issues he had. He’s constantly swishing his tail and plays wildly with his bird toys. Everything Willow does now is grand; even when he goes to his litter box, he scratches and throws his litter around, almost creating art when he’s done (and Jill doesn’t mind).

When Jill recalls how shy Willow was when she first adopted him, she can’t help but think how scary it can be for pets to lose their homes. Now, every day, Willow is a reminder to Jill that a pet’s personality can change tremendously once he knows he’s home. 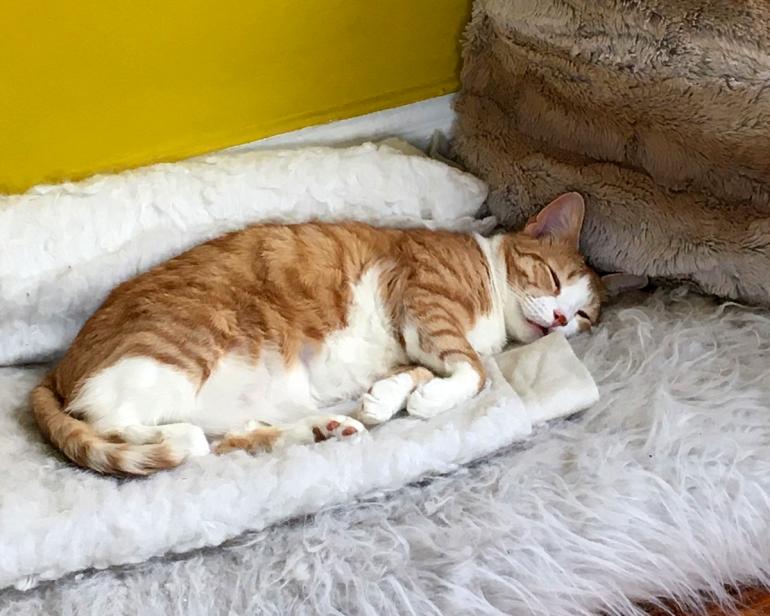