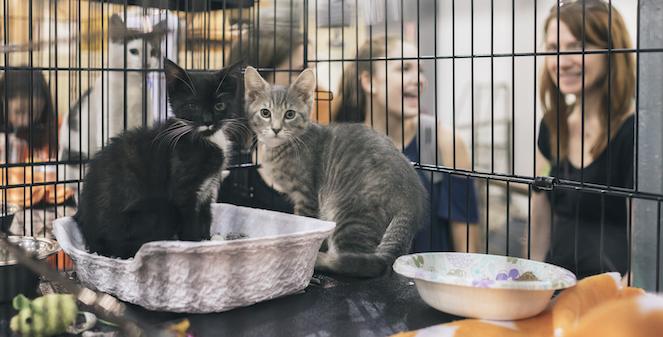 Adopters line up for a most stylish cat adoption event.
By: Nicole Hamilton on August 17, 2016

They say love can happen when you least expect it, and Pamela Henneberry would probably agree. She was hanging out at Urban Outfitters in New York City when she met Phyllis, a three-year-old tabby who stole her heart.

Pamela was at the store as a volunteer for the recent Adopt and Shop event, presented by Urban Outfitters and Best Friends–New York on a recent Saturday at 10 stores across the city. And Phyllis was one of 95 cats — all originally from Animal Care Centers of NYC — who found forever homes that day. 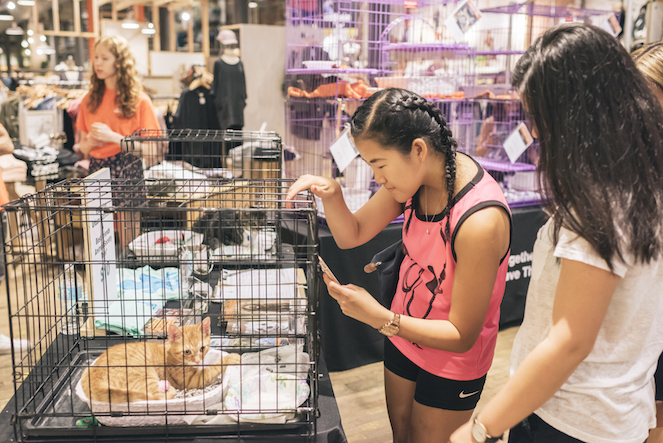 Adopting a cat is always in fashion

“August can traditionally be a very challenging time for cats, so we were very excited and grateful when Urban Outfitters again decided to come onboard and partner with us for this lifesaving opportunity,” says Elizabeth. “These events help both the cats who find homes and our shelters, because they help free up space for more homeless cats to get adopted.”

Urban Outfitters covered the adoption fees that day, and the event was busy even before it officially started. Lines of people waited outside some locations — cat carriers in hand — for the doors to open. And by later in the day, some of the participating Urban Outfitters stores had every single cat adopted.

Even Urban Outfitters customers who couldn’t adopt played a pivotal part in making the day so successful. “We got a tremendous amount of support from people who were there to shop, through donations or through the purchasing of Best Friends merchandise,” says Amy Davila, marketing manager for Best Friends–New York. “Many wanted to know when we’d do this again.”

Cara Flaherty, events and content manager for Urban Outfitters, says Adopt and Shop was very rewarding for the Urban Outfitters staff. “It was a great way to interact with the local community for a good cause,” she says. ”And the most exciting part was seeing so many cats and kittens find amazing homes in just one day.” 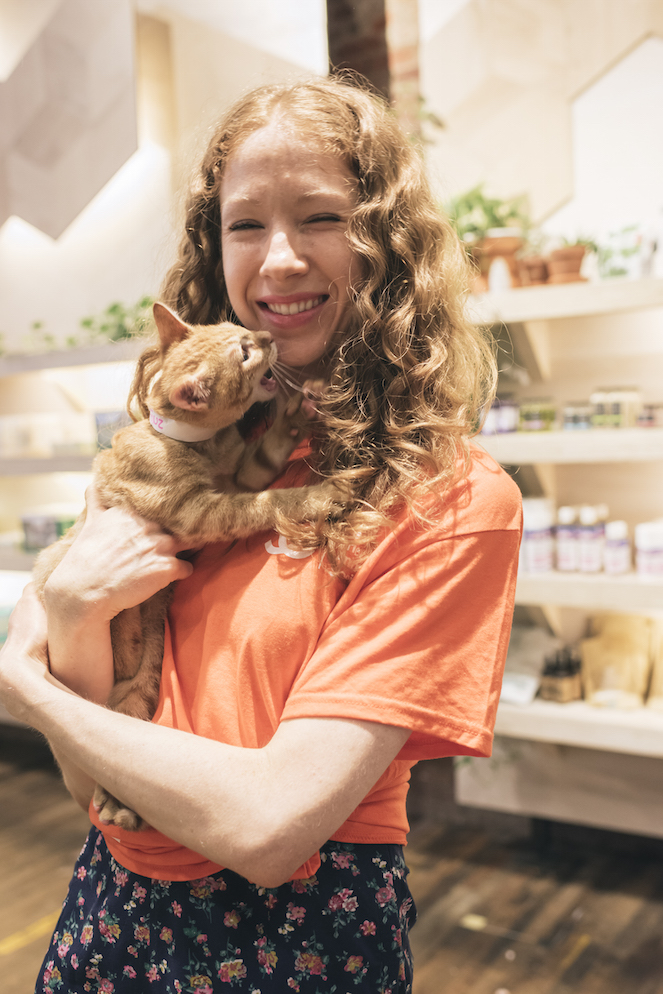 A chance meeting gets a cat a home

New to the neighborhood, Pamela thought volunteering at the cat adoption event would be a great way to meet her neighbors and spend some quality time with cats. Pamela had never had a cat of her own, but she had always liked cats and thought she might like to adopt one someday. She thought volunteering would be a good way to gain some insights into the world of felines.

Soon after beginning her shift, she spotted Phyllis.

“She was tiny and sweet — everything I was looking for,” says Pamela, whose plan was that if Phyllis wasn’t adopted by the end of her shift, she’d give her a forever home.

One by one, cats went home with New Yorkers to start their new lives, but Phyllis remained. And when Pamela finished her volunteer duties, she took a cab to the nearest pet supply store and bought everything Phyllis would need at her new home. Then she returned to Urban Outfitters and adopted her very first cat.

“I didn’t expect to find my perfect cat when I walked into the store to volunteer,” says Pamela, about Phyllis, who has settled in nicely since getting adopted. “But I imagine that happened a lot at Urban Outfitters that day. I guess when you know, you know.”