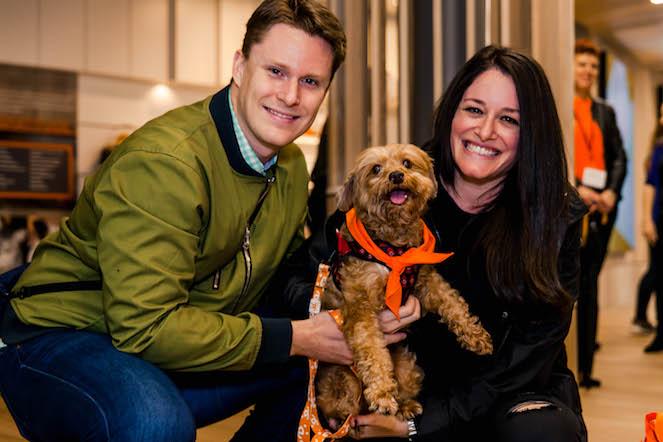 Chewy’s adoption marks the first of many at the new Best Friends Pet Adoption Center in NYC.
By: Nicole Hamilton on April 13, 2017

Chewy is a popular guy these days. The six-year-old dog has certainly come a long way from Animal Care Centers of NYC (ACC), where he was surrendered before coming to the brand new Best Friends Pet Adoption Center in New York.

Chewy was the first pet to be adopted from the center, and he’s been hearing applause ever since.

“We were so happy to be the first to adopt from the new, beautiful center,” says Chewy’s adopter, Rachel. “He is the sweetest, most well-behaved dog we could have wished for.” 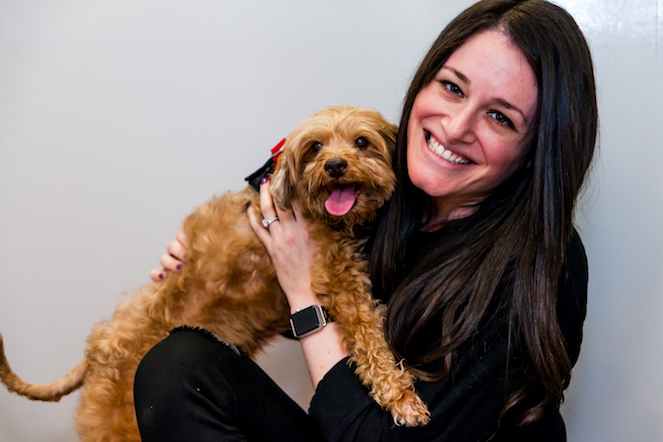 A perfect day to adopt a dog

Rachel and her husband Patrick first met Chewy when he was living with a family that fosters dogs from Best Friends in New York. The couple loved how laid back and happy Chewy was with them and their dog, Charlie.

They had always planned on getting a second dog and were waiting for the right time. When they learned that Chewy would be at the center on the day it opened, they decided now was as good a time as ever.

From the moment Rachel and Patrick saw Chewy, they knew they were making the right decision. And Chewy must have known it, too, because he wagged his tail happily when he saw them.

Cheers from the opening day crowd erupted as Rachel and Patrick signed papers making the adoption official. Then, Rachel carried Chewy out the front door. And Chewy’s tail has been wagging ever since.

From the ACC to a loving home

It’s hasn’t always been easy for Chewy, which is what makes his adoption even more special. He has separation anxiety, and that’s not easy.

With help from Best Friends staff and time spent in a patient and loving foster home, Chewy learned that the world around him is not a scary place.

Shannon Kirkman, adoption and foster coordinator for Best Friends in New York, watched and smiled as Chewy was adopted, and with good reason. “Rachel and Patrick were the perfect adopters for Chewy,” she says. “He needed to go to a special home where he could feel safe. Having another dog in the home would help Chewy, too.”

Chewy settled quickly into his new home and became instant BFFs with Charlie. Today, he loves cuddling with Rachel and Patrick. And while he acts a lot younger than he is, Rachel and Patrick say their decision to get an adult dog was good one.

“I can’t imagine a puppy in our one bedroom apartment,” says Patrick, recalling Charlie’s energy as a young pup.

Rachel agrees. “We are giving him a great second part of his life,” she says of her new dog, who will always have the honor of being number one.

Come visit us in Soho