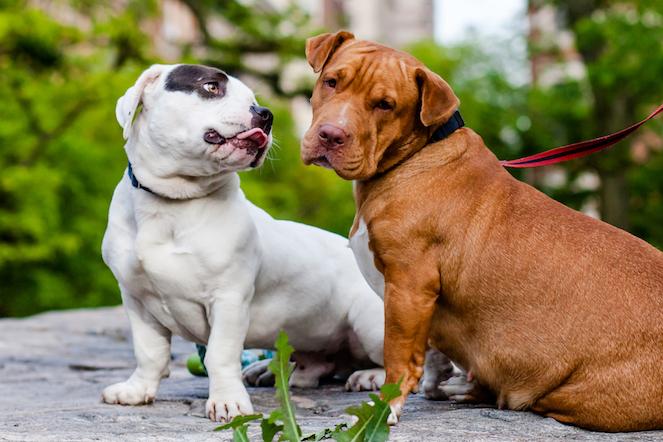 They ended up in a shelter together, and now this dog and her grown-up puppy have play dates in NYC.
By: Nicole Hamilton on May 17, 2017

One cool day in February, a young pit bull terrier mix named Slick went for a walk in Riverside Park with his new family, which had recently adopted him from Best Friends in New York. As Slick made his way to the Soldiers and Sailors Memorial Monument, his tail began to wag in excitement. Standing across the wide marble plaza was someone he didn’t expect to see. It was his mother, Emma.

The reunion, planned by Slick and Emma’s adopters, was as joyous as they hoped it would be. Emma, a 65-pound red Bassett hound and pit bull terrier mix, who had also recently been adopted from Best Friends, recognized her puppy in an instant. Gone was the typical tentativeness Emma has when she meets a dog for the first time. As soon as she saw Slick, her tail began wagging, too.

The two dogs are now in a much happier place than they were a year and a half ago when their owner surrendered the two dogs to Animal Care Centers of NYC, the city shelter. That was a low point in their lives. But then Best Friends took them in, and they both went to foster homes shortly after.

Soon after Slick arrived in his foster home, Kristina Jensen and her husband Evan became smitten with their young, quirky houseguest. They decided to adopt him. 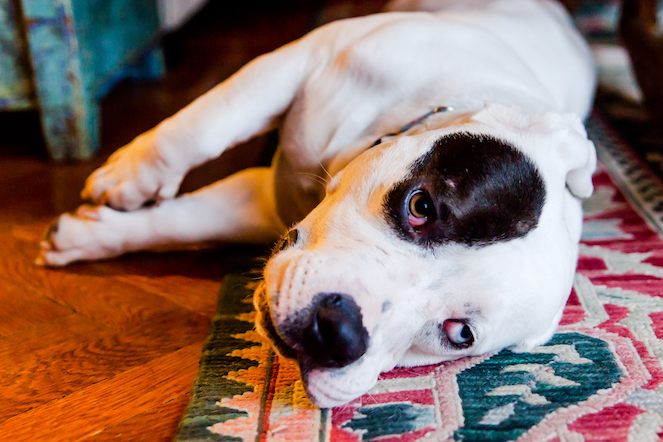 Across town, the same thing was happening for Emma. Don Lavenhall and his husband, Jeffrey Lewis fell in love with her sweet and fun-loving personality. “From the first moment Emma hopped out of the Best Friends van, we knew she had found her forever home,” says Don. 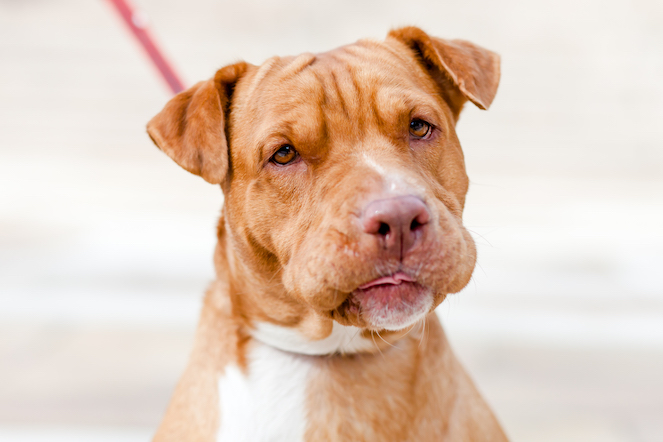 As the two dogs were settling into their new homes, Kristina had an idea. She knew Slick had arrived at the shelter with Emma, and since adopting Slick, she’d been keeping track of Emma’s adoption status through the Best Friends volunteer foster network. When she learned that Emma also had been adopted, she reached out to Don and Jeffrey to ask if they’d like to set up a play date to reunite the two dogs. They loved the idea, and suggested getting Slick and Emma together at Riverside Park in Manhattan.

They remembered each other in an instant, and at that moment, says Don, “They started literally jumping for joy. It was so heartwarming to see Emma lower her guard with another dog and watch her play with such total ecstatic joy.” 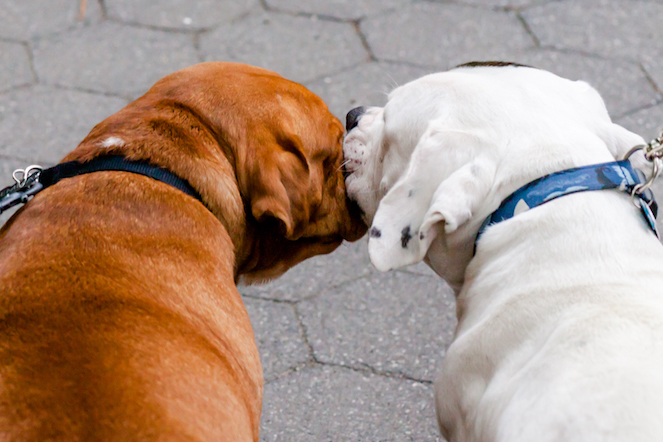 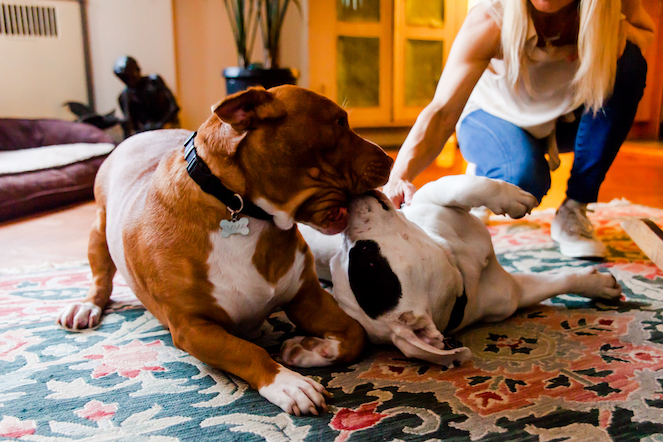 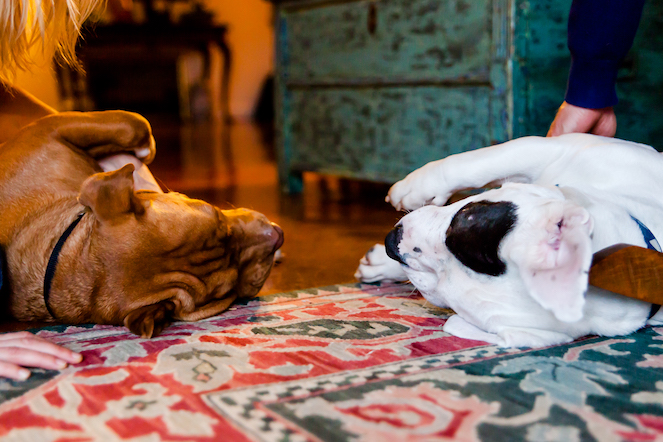 “Reunions like this don’t happen every day,” says Shannon Kirkman, foster and adoptions coordinator for Best Friends in New York. “When we heard this was going to happen, we were so excited for Slick and Emma, and it showed us how engaged and connected our volunteer network has become.” 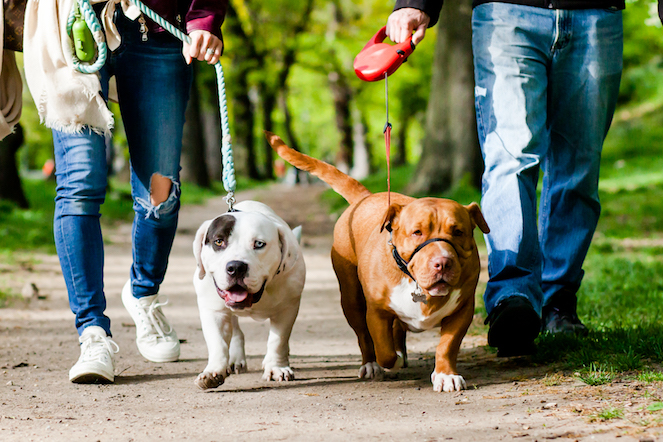 Both dogs are doing great in their new homes. Slick’s laid back nature has helped him adjust to his new on-the-go lifestyle that includes weekends in Montauk, subway rides and an occasional trip to Los Angeles. “Slick has given my husband and me a chance to share responsibility,” says Kristina. “And he’s livened things up. He’s sort of a ham.”

As for Emma, she’s affectionately called the “Houndessa” by the building staff where she lives, and “The Emmasaurous” by Jeff and Don. She’s learning how to share a one-bedroom apartment with Tim, an 11-year-old cat who was rescued in Long Island 10 years ago. “We used to have an apartment,” says Don. “But now we have a home.”

Slick and Emma have had two play dates since getting adopted. And while they’ve come a long way on their own since the first time they were reunited, one thing was still the same: As soon as they saw each other their tails started wagging, and then the playing began ― showing that some bonds can’t be broken. 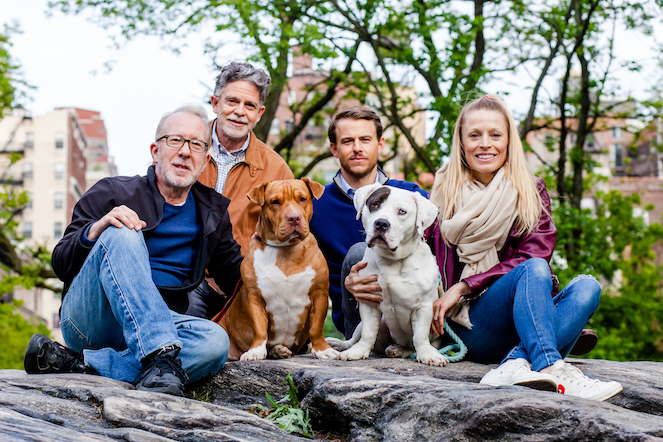 Help to Save Them All.  Join Best Friends.