How One Best Friends Dog Changed the World 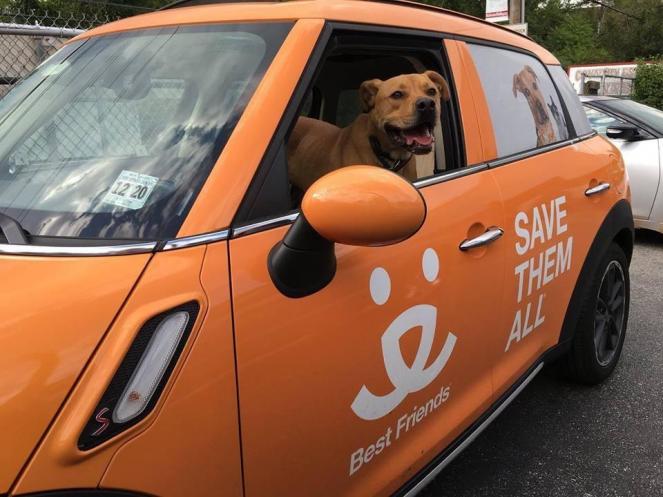 Seasoned Best Friends Animal Society in New York City staffers and volunteers will always remember Tyler, a big boy with an even bigger heart. For those that do not know him, Tyler joined the Best Friends family as a puppy in the winter of 2015 after being found on the streets by Animal Care Centers of NYC. As he grew into an energetic (and large) adolescent, Tyler could be hard to handle: he would often jump (sometimes on people, sometimes five feet straight into the air), had a high energy level, and he’d occasionally become mouthy when excited. From his estimated age of four-months when Best Friends rescued Tyler, to the age of 2+ years, he waited patiently in the kennel to be adopted, and although he made many friends, his size and part pit bull appearance seemed to deter people away.

Time was slipping by but Tyler never lost hope. Pete Vega, an experienced and dedicated Best Friends: NYC volunteer dog handler, made it his mission to visit Tyler regularly for visits and enrichment. Fortunately for Tyler, he was a Best Friends dog, and Best Friends never gives up on the animals in their care.

Just as Tyler was being considered as a candidate for the Best Friends Animal Society sanctuary in Utah in 2017, volunteer Best Friends: NYC trainer, Michele McLeod, offered him training at her Connecticut farm. Michele, a longtime Best Friends volunteer and founder of Sirius Positive Training, began working with Tyler on his behavioral issues and good manners. Tyler loved living on a farm and became quite the man around town in Newtown and surrounding areas: he visited dog friendly stores and developed a CT fan base. Michele was given permission by Best Friends to post a flyer that would spread the word in the suburbs and farm areas about this great dog. He was even highlighted in People magazine during their Clear the Shelters campaign – everyone was determined to find Tyler a home.

Then, nearly two-and-a-half years after Best Friends rescued Tyler, and after a few months of training at Michele’s farm, the commitment of his team, and BF staff and volunteers, finally paid off. When he was just shy of three years old, Tyler officially found his forever home with Jaclyn and James – the moment he had been waiting for finally came true.

They instantly fell in love when they discovered Tyler’s handsome face on a flyer at one of their favorite hangouts (coincidentally, it was also one of Tyler’s favorite spots, a creamery where he regularly visited for his favorite treat – a vanilla ice cream cone). Jaclyn shares, “To be honest, I couldn’t believe it when they informed me that Tyler hadn’t been adopted yet. After speaking with Michele and Peter, who had spent so much time with Tyler, I learned about his exuberance and what he had accomplished in training. While I didn’t have a lot of experience, especially with a dog of his size, that didn’t stop me from taking a chance. Tyler had been waiting a long time, and James and I were ready to give him what he wanted most: a home and his very own family.”